Item consists of one photograph of Esquimalt dry dock construction and Signal Hill. 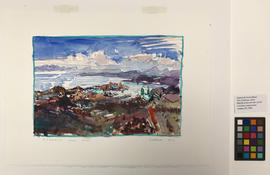 Item consists of one watercolour painting of Esquimalt by artist John Hartman.

Part of Behind the Kitchen Door project oral history collection

The item consists of an audio interview recorded in Brentwood Bay, B.C. on July 26, 1984.

Tape summary:
Track 1: Interviewee was born in 1911 in Malta where her father was stationed at the time. Her father was in the army, so the family lived at the Esquimalt barracks when they returned to Victoria. Father was a pharmacist and a trained male nurse. Interviewee had been a domestic before her marriage. She describes what life was like for women living in the barracks; army reluctant to accommodate their needs. Their home is described in excellent detail, as is the kitchen, food purchase and storage, laundry, ironing, and domestic science in school.

Track 2: She discusses the jobs she held before marriage and the family home in Victoria after they moved from the barracks. She describes the home she lived in after marriage and compares it to her childhood home.

SUPPLIED TITLE OF TAPE(S): The Esquimalt by-election of 1951 PERIOD COVERED: 1913-1965 RECORDED: [location unknown], 1977-02-15 SUMMARY: TRACK 1: A.C. Wurtele was born in Kingston, Ontario, 1897. He describes his family background and gives a brief outline of his naval career from 1913 until his retirement in 1945. A brief account of his career as an alderman in Esquimalt up until the time of the 1951 provincial by-election. The 1951 by-election: dealing with W.A.C. Bennett. TRACK 2: More on the 1951 by-election. Discussion of the bitterness and in-fighting between the Liberals and Conservatives within the Coalition. The by-election campaign and the roles of Wurtele, Bennett, Waldo Skillings and Ron Worley. Public meetings described. The opponents: Percy George and Frank Mitchell. Wurtele defeated by Mitchell and the Coalition candidate badly defeated. General assessment of the by-election and its effects on Wurtele's career as Reeve of Esquimalt, 1951-65. (End of interview)

SUMMARY: Lyle Kahl, Social Credit MLA for Esquimalt (1975-1979) discusses some of the problems of his constituency.;

Series includes correspondence, diaries, personal and business records, including papers of his grandfather, Robert Ker, and father, David Russell Ker, who was president of Brackman and Ker Milling Company, and who retained some of the records of this company.

Robert Henry Brackman Ker was born in Victoria in 1895, the son of David Russell and Laura Agnes (Heisterman) Ker. He was educated in Victoria and in England and in 1914 became a lieutenant in the 50th Gordon Highlanders. In 1915 he went overseas with the 48th Battalion, Canadian Expeditionary Forces (C.E.F.) and was seconded to the Royal Flying Corps (R.F.C.), serving in France with 24 Squadron, R.F.C. and then late in 1917 served at Camp Borden as a squadron commander. At the end of the World War I he entered local business in Victoria, involving himself in insurance and real estate. He was also active as a director and later president of Brackman and Ker Milling Company, and served in similar capacities with various flour milling, brewery, and oil companies, including Purity Flour Mills Limited, Home Oil Company Limited, and Molson Breweries, Limited. He also served on the board of directors of the B.C. Power Corporation and B.C. Electric Company, Montreal Trust Company, and University of British Columbia. From 1923 to 1924 Ker served on Victoria City Council as alderman and involved himself in other civic activities, as president of the Victoria Chamber of Commerce and as chairman of the Victoria Community Chest campaigns in 1937 and 1938. In later years he took an active interest in the affairs of the Greater Victoria Art Gallery and St. Michael's University School.

The records consist chiefly of correspondence arranged by Mr. Ker alphabetically by subject, boxes 2-24. This arrangement has been maintained except for the contents in box 1 which were extraneous to the filing system used by Mr. Ker. This material has been sorted and arranged chronologically.

In addition, Mr. Ker preserved some of the papers of his grandfather, Robert Ker, who served as Auditor General in the colonial Government of Vancouver Island and British Columbia, and his father David Russell Ker, who was president of Brackman and Ker Milling Company Limited, and who retained some of the records of this company. These records are contained in boxes 25, and 30-33.

This accession contains approximately 1,000 prints, postcards and negatives of soldiers, family groups and holidays. The negative albums are indexed.

CALL NUMBER: T0639:0001 RECORDED: [location unknown], [196-] SUMMARY: TRACK 1: Mr. Muir discusses how sailors would dock at Esquimalt in 1903 including the clothes they wore and dances they did, the music the sailors played on the streets of Victoria, more on the sailors, his father (Archie Muir) who was the first engineer at the dry dock, packing fish in the old days, what the old dry dock was like including activities there in 1887, the native boys while he was in school, the children of Naval officers, more on what life was like, his work in a machine shop in 1900, what the inside of a store in Esquimalt was like, and more on early Victoria. TRACK 2: Muir continues by describing what shops were like including the wooden floors and the card tables in the bars, how there were no civilians in the Navy yard, submarines in Esquimalt, using guns at the shooting range, Rev. Sharpe, and parties that the Germans gave, including the instruments used.

RECORDED: [location unknown], [196-] SUMMARY: TRACK 1: Major George Sissman (88 years old) describes coming to Victoria in 1903 on transfer from Halifax while in the British Army, life in the Army, his first impressions of Esquimalt, social life, his duties as a clerk, more on social life among officers, how Esquimalt declined when the British ships left in 1906 leaving only one ship behind, changes in Victoria over time, and a story about a murdered officer. [TRACK 2: Blank.]

Scrapbooks of clippings and memorabilia of 1951 provincial by-election in Esquimalt and his career as reeve.

Footage. Exterior and interior shots of the inn and tourist attraction in Esquimalt.

SUPPLIED TITLE OF TAPE(S): Military life in Esquimalt, B.C. PERIOD COVERED: 1907-1914 RECORDED: Victoria (B.C.), 1962-03-30 SUMMARY: TRACK 1: This tape begins with brief comments by Eva Gillan (nee Eva Hart), about her theatrical career; this is the conclusion of an interview by Grace Shaw, continued from T1302:0001. The tape continues with Imbert Orchard's interview of Colonel John Quinn Gillan. He recalls his arrival in Esquimalt as a British soldier in 1907; the army in the Victoria area prior to World War I; a 1914 incident; concerning the coastal defense guns; and the Canadian Navy. [TRACK 2: blank.]

RECORDED: [location unknown], 1962-05-18 SUMMARY: TRACK 1: Major Maxwell Kirkpatrick-Crockett talks about his arrival in Vancouver in 1911; early jobs in Vancouver; work in Victoria; Arthur Currie; commission with the Fifth Regiment; Victoria at the; outbreak of World War I; coast defense batteries at Esquimalt in 1914; the affair of the "BC submarines"; fear of coastal attacks; state of coast defenses; the 5th Regiment sent to Nanaimo because of rioting [i.e., striking] coal miners; the damage at Extension. TRACK 2: Major Kirkpatrick-Crockett continues speaking about incidents at Extension; Ladysmith; German interest in British Columbia in; 1914; [von] Alvensleben; anti-German feeling; history of St. John's Church; Victoria; Christ Church; Bishop Hills; Reverend Cridge and conditions in Victoria after World War I; work in the Victoria Machinery Depot and for the City of Victoria.

RECORDED: [location unknown], 1962-03-29 SUMMARY: TRACK 1: Mrs. Muskett, granddaughter of Sir Henry Crease, talks about her girlhood in Esquimalt; Constance Cottage; the village of Esquimalt; growing up in Victoria; summer camping; the Royal Navy; her grandfather, Sir Henry Crease; impressions of Victoria and Esquimalt; Victoria today; childhood; Christmas celebrations; the smallpox epidemic; Indians; her husband's school, the Collegiate; and yacht and canoe races during May 24 celebrations. TRACK 2: Mrs. Muskett recalls a typical day in her grandfather's house, "Pentrelew"; meals; the Crease family; appearance of the house; life in the house; ladies calling days; and the bathroom.

RECORDED: [location unknown], 1962-05-16 SUMMARY: TRACK 1: Mrs. Robertson recalls the James Bay area in the 1870s and 1880s; the causeway; the chain gang; her father, Lieutenant Colonel Richard Wolfenden; his arrival with the Royal Engineers; his work as King's Printer; his rifle shooting awards; the family home in James Bay; the founding of the Fifth Regiment; her first husband, Charlie Innes; her first home in Esquimalt and her later life. She talks about her early life; living conditions; black residents; Sir James Douglas and his family; Judge Crease; Sir Matthew Baillie Begbie; the Chinese; the Royal Navy and a childhood incident. TRACK 2: Mrs. Robertson continues with her recollections of the Carr family; Emily Carr's character; and childhood incidents.

PERIOD COVERED: ;1912;-;1920 RECORDED: Victoria (B.C.), 1962-03-30 SUMMARY: TRACK 1: In an interview with Imbert Orchard, Mrs. Eva Gillan speaks about her arrival in Victoria from England in 1912, and her first impressions. She is a well known singer under her maiden name, Eva Hart, and talks about the Empress Hotel, music and entertainment. She discusses the "Englishness" of Victoria; tourism; prominent families; the Pemberton family; the Pooley family; the Dunsmuir family; the Barnard family; local Indians; the Chinese; Esquimalt; Vancouver and the real estate boom. Grace L. Shaw continues the interview (for a radio program on the history of theatre in Canada). Mrs. Gillan talks about her musical career; theatrical life in Victoria in 1912; Reginald Hincks; the opening of the Royal Theatre; and various performances. Grace Shaw's interview with Mrs. Gillan is continued on tape T1301:0001. [TRACK 2: blank.]