This series consists of cause books from the Supreme Court of Chilliwack, 1916-1969. The books include primarily civil cases including adoption and divorce.

Cornelius Bryant emigrated from England in 1856. He taught school in Nanaimo from 1857 to 1870, and then became a Methodist minister, serving in that capacity at Nanaimo, at several places in the Lower Mainland and Lower Fraser Valley, and at Bell... 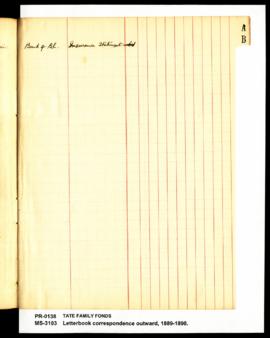 The series consists of a letterbook created by C.M. Tate between 1889 and 1898. The entries of his outward correspondence from 1889 to 1893 were written while he was in Chilliwack at the Coqualeetza Home and School. Entries from 1894 to 1898 are...