Television stock shots. The first section shows street vendors with their carts (as well as musicians and tourists) on the Inner Harbour causeway. The second part (dated 10-Jul-1978) shows the demolition of the old Black Ball Ferry terminal on the Inner Harbour. 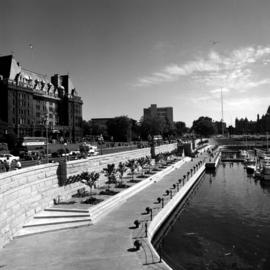 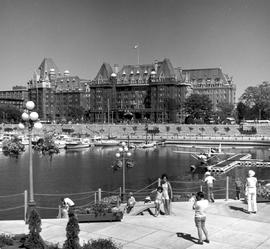 The item is a film print of special event coverage. To commemorate the hundred years since British Columbia joined the confederation of Canada as a province, the ten provinces and two territories each sent a seven-man crew into the B.C. interior for a nineteen-day sojourn over some 817 miles of provincial waters. The purpose was to draw attention to the challenge of Canada's outdoors and canoeing, and at the same time retrace the past routes followed by explorers. Travelling in twenty-five Norwester canoes, the flotilla began its journey from Fort St. James and concluded at Victoria's Inner Harbour. Museum and Fannin Building in background.