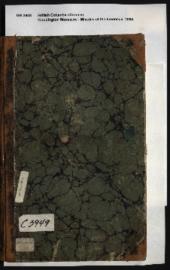 Waddington massacre : minutes of the evidence

This series consists of one volume titled “Waddington Massacre : Minutes of the Evidence” related to the Tsilhqot'in War, also historically referred to as the Chilcotin uprising and Bute Inlet massacre. The notebook is mostly blank but was used to record several kinds of information, including: diary entries; draft letters; transcriptions of hearings and statements; sketches and diagrams; accounting information relating to expenditures; and an unrelated County Court schedule for 1868.

The diary entries cover the period June 6 to July 12, 1864. The creator is unclear, but it may have been written by William George Cox, Gold Commissioner and Magistrate for the Cariboo region, or someone in the group of men who travelled with him from Alexandria in an attempt to apprehend the Indigenous men allegedly involved in the deaths of several settlers. This group was referred to as the Alexandria expedition. This estimation is based on the events and dates in the diary and their similarity to Cox’s expedition as described in related colonial despatches. The expedition resulted in the arrest and execution of six Tsilhqot’in Chiefs.

The notebook also includes several sworn statements from witnesses related to events of the Tsilhqot'in War.

Letter to Provincial Archivist E.O.S. Scholefield from Anthropologist James A. Teit regarding Simon Fraser's identifications of the Shuswap, Chilcotin and Thompson River Indians.

The series consists of Forest Branch records created between 1912 and 1914. The series contains timber cruiser reports by W.J. Kelly on diverse tracts, including holdings of the Lillooet and Cariboo Land Company, Ltd. Reports include numerous photographs and maps.

The series consists of records created by the Department of Lands between 1882 and 1923. It contains a Coast Land District, Range 2 lot register for lots 1-693. The register lists the lots in numerical order and records the alienation of land from the Crown (by purchaser, pre-emption, lease, etc.). Information may include the name of the purchaser, dates and numbers of certificates issued (including Crown Grants), dates and amounts of payments, and reference numbers to correspondence files and field books. The volume contains an alphabetical name index.

Correspondence files of the District Forester relating to timber sales

The series consists of records created by the Department of Lands between 1888 and 1953. It contains a Coast Land District, Range 3 lot register, covering lots 1-720. The register lists the lots in numerical order and records the alienation of land from the Crown (by purchaser, pre-emption, lease, etc.). Information may include the name of the purchaser, dates and numbers of certificates issued (including Crown Grants), dates and amounts of payments, and reference numbers to correspondence files and field books. The volume contains an alphabetical name index.

The collection consists of oral history interviews pertaining to ranching and pioneer life in the Chilcotin region of B.C.

Papers and other material

This series contains working records consisting of: File 1. Land Use and Land Alienation, Forestry vs. Ranching in the Interior of British Columbia, a xerographic copy of a paper presented to a hearing on land use at Quesnel on November 15, 1968; File 2. Memoranda on range management training 1978; File 3. Agenda for the 1978 Range Managers' meeting.

The collection mainly consists of oral history interviews with Cariboo district residents, mainly recorded by Dr. John Roberts and Reg Beck. It also includes some radio coverage of special events in the area. Some of this material was recorded for (or broadcast by) CKCQ Quesnel or its sister station, CKWL Williams Lake.

This series consists of land and resource management committee files and executive records from the Cariboo Region, 1990-1998. Records relate to a variety of environmental and land use issues in the Cariboo Chilcotin area, including: wildlife management, water, use of range land, Taseko Mines proposal, fishing, land and resource management plans (LRMPs) and the development and implementation of the Cariboo Chilcotin Land Use Plan. Records include correspondence, reports, minutes, reference material and briefing notes.

Executive records include referral replies, files of reference material and some files regarding specific issues and projects involving the Minister and other Executives.

Records include minutes and other operational records of several different committees. Most records are from the Cariboo Regional Interagency Management Committee and Commission on Resources and Environment (CORE). There are also related files from the Cariboo Chilcotin Regional Resource Board, Cariboo Chilcotin Land Use Committee and meeting files from various regional mangers and executive groups.

Files may include consultations with and comments from community groups, resource users and First Nations regarding the development of management plans, land use and environmental issues.

Records have been selected for permanent retention and are scheduled under Administrative Records Classification numbers 204-20, 280-30 and 102-20.

Records relating to the development of Integrated Resource Use Plans by the Ministry of Forests and Range which are designed to resolve resource use conflicts in specific areas at the local level. Records relate to the use, management and access to various resources.

Ministries responsible for the creation of this series, and their dates of the responsibility, are:
Ministry of Forests 1988-2005

Records relate to the administration of Grazing Licences and Grazing Permits as defined under the Range Act, and Grazing Leases as defined under the Land Act, including issuance, amendments, transfers, billing, monitoring, policy administration, and plans specific to tenures, such as Grazing System Plans. Also includes records concerning additions and deletions of land and/or authorized Animal Unit Months (AUM) from grazing tenures. Records include tenure application forms, grazing plans, authorized livestock, correspondence, maps, records determining range boundaries and use, and information on range improvements and clearing.

Each file relates to a particular range tenure. Note that there may be additional individuals or companies who held the tenure who are not listed in the file title. Files are arranged alphabetically.

Classified as 15700-50 in the Forests Operational Records Classification System (ORCS).

This series consists of silviculture records from the Cariboo Forest Region and its predecessors, 1950-2005. The region has included a variety of different forest districts over time. Records may regard the following Forest Districts: Williams Lake, Horsefly, Chilcotin, Likely, Cariboo and 100 Mile House. Note that the names and boundaries of districts and regions varied over the years.

The Ministry of Forests defines silviculture as “the art and science of controlling the establishment, growth, composition, health, and quality of forests and woodlands to meet the diverse needs and values of landowners and society on a sustainable basis.”

Most files consist of silviculture opening records which document the historical silviculture treatment work that has been undertaken on specific areas of land that are referred to as openings. These files regard changes in the forest cover, changes in prescriptions, cut boundaries, changes in site prescriptions and records involving impacts on silvicultural treatments. Files may contain a wide variety of record formats including textual records, photographs and maps. The textual records include computer printouts, photocopies, cards, reports and correspondence.

Most files are quite small. They usually consist of a map of the area and a computer printout titled the History of Crop Establishment and Tending which provides a history of use and information regarding prescriptions, site preparations, reforestation and stand tending.

Opening files are arranged in several numerically ordered groups by a classification number. The first six digits (ex. 93A 001) corresponds with the National Topographic System location codes and the last three digits consist of a sequential number applied to each file. File titles may also include the related forest tenure number or other information for that parcel of land.

Ministries responsible for the creation of this series, and their dates of the responsibility, are: