Special event coverage. Depicts parades at day and at night. Parades and fireworks in celebration of Victoria's 75 anniversary.

100th anniversary of the Carpenters and Joiners Union (Local 1598)

Documentary. This film depicts a trip from Seattle to Victoria on the S.S. Princess Marguerite, and profiles the history of the ship -- and of her namesake, an earlier B.C. coastal steamship that was sunk during World War II while serving as a tr...

The item is a black and white photograph of the Gorge in Victoria, BC, probably taken by Charles Macmunn in the 1890's.

The item is a black and white photograph taken by Richard Maynard in 1896. The photographs shows the aftermath of the Point Ellice bridge collapse. 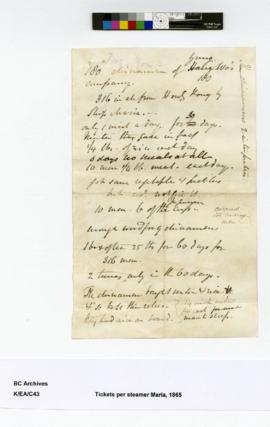 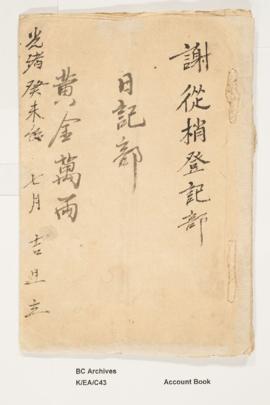 The item consists of a photocopy made in 1975 of William T. Straith's scrapbook. The scrapbook contains newspaper clippings that document Straith's career as Minister of Education and Provincial Secretary from 1947 to 1953. The scrapbo...

The file consists of one letter from Catherine Penrice in England (1866) enquiring about friends in Victoria. It also contains 12 pages of poetry of a religious nature written or transcribed by Mrs. Blinkhorn (1840).

The item is a photocopy of a history paper by Stuart Charles Berry called "The Songhees Land Transfer, Victoria, 1911." Undergraduate essay, History Department, University of Victoria.

"The election of Sir John A. Macdonald in the Victoria riding in 1878," prepared by Research Branch, Library of Parliament, Ottawa, in response to request by Allan McKinnon, M.P., Victoria B.C.Copy provided by the office of Allan McKinno...

Daily journals (6 vol) 1913-1918 chronicling the Point Ellice's service as a steam dredge tender for the Dept. of Public Works.