One sketchbook with 33 drawings by Emily Carr within. The images include cartoons with verse, posed models. Pages of poetry includes "The Olsson Student" which refers to a separate series of images (PDP06117 to PDP06124) created by Carr,... The First Woman Comes To Saanich In 1858.

William and Margaret Thomson in the summer of 1858 on their way to Saanich, as written in pencil on the back of the mat of another version of the same print, PDP01192. Prior to 1859, For a Fire of Any Size the 'Jacks' Ran All the Way from Esquimalt The Spanish Explorers were the First White Visitors to the W. Coast in 1790 "Government Street, Before The Removal Of The Old Bastion." Sunset: A View of the Entrance to Victoria Harbour, Vancouver Island, British Columbia.... [Wreck of the S.S. San Pedro on Brotchie Ledge] 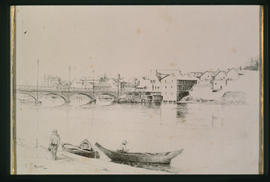 Fisgard Lighthouse and Belmont from the Naval Yard, Esquimalt Barns at Lake Hill Farm, Vancouver Island, BC, Built in 1866 View from Victoria Harbour with Parliament Building in background.