Item consists of a photograph of the Alexandra suspension bridge over the Fraser River, 13 miles from Yale. A collection of portraits of native people from different tribes

A Group at the British Camp San Juan Island. 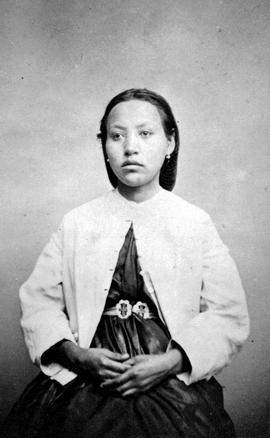 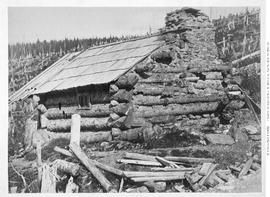 A Miss Brown and a Miss Irving, the only two unmarried women of New Westminster at that time; on the road to Spuzzum from Yale, on the Fraser River 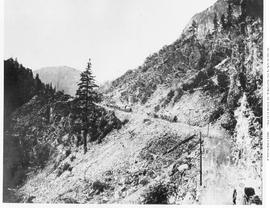 Item consists of a photograph of the 19 mile post, past Yale. Wagons can be seen on the Cariboo Road. Item consists of a photograph of the 17 Mile Bluff on the Cariboo wagon road. 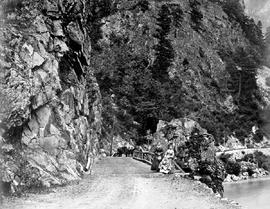 A view at Yale, Fraser River; the two ladies are Miss Irving and Miss Brown of New Westminster

Standing at side of road along river.

A view of San Juan Island from Vancouver Island 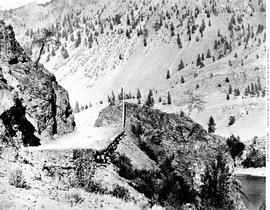 A view on the Thompson River at the Great Bluff. 88 miles above Yale. Admiral Hastings, Mrs. Hastings, and the ship's officers and men of HMS Zealous, at Esquimalt. Aerial of Victoria from Church Hill 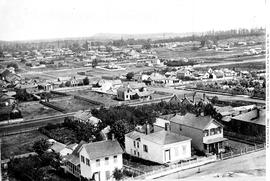 Aerial of Victoria from Church Hill

Item consists of one stereograph, aerial photograph of Victoria, taken from Church Hill. Rae Street is visible in the foreground and Yates Street in the distance. Quadra Street Cemetery is at the viewer's right.

A large number of lantern slides depict scenes of the Fraser River gold rush era of the 1860s, in the regions of Yale to Barkerville, Quesnel and Cottonwood in the interior of British Columbia. Many of the reproductions of photographs featured in the lantern slides in this collection are attributed early pioneer photographer’s works including those created by Richard Maynard during the 1860s and A.H. Maynard’s works produced in the 1920s. It also includes the photographic works of other early B.C. photographers including Frederick Dally (1838-1914), likely Louis A. Blanc who documented similar subjects as the Maynards particularly Barkerville, the Cariboo and the Cariboo Roads in British Columbia during the period before and after the Fraser River gold rush of the 1860s. A small number of photographic works by Frederick Dundas Todd (1858-1926) and F. [Dewitt] Reed are also contained within several of the slide collections.

Accessions 198203-025 and 198203-065 consist of slide compilations that depict a visual narrative of the history of Barkerville, the Cariboo Road and Cariboo region in the B.C. interior during the period of the 1868 Fraser River gold rush era and sixty years later in the 1920s. The bulk of the scenes of the gold mining resource industry, as well as views of transportation roads and routes along the journey to the goldfields. To a lesser extent views of other resources industries (forestry, agriculture, fishing and farming/ranching) are depicted against the nature and lands of the B.C. interior. Mining towns within the Lighting Creek and Williams Creek Districts, including Barkerville (before and after the fire of 1868), Richfield and Cameronton are represented, as well as other scenes representing the following views of gold mining operations: claims sites, posed group portraits and likenesses of miners, equipment and the production activity of early mining technology of associated mining companies, businesses and partnerships in the area. Photographs of mining claims and claims sites and the miners and labourers involved at Mucho Oro, Aurora Gold, Minnehah, Never Sweat; The Rankin Company (Grouse Creek), Ne’er do Weel (Grouse Creek) and the Canadian Grouse Company (Grouse Creek) are included in the sequences. Imagery along and of the Cariboo Road(s) are described as depicting various views, scenes and activities including: freight and trade transportation, transportation methods and transportation routes (ox pack teams, gold escorts; steamer “Reliance” and Fraser River crossings; travelers); views along the Cariboo Road(s) that include the geological terrain of the Fraser River (its river banks and surrounding forested and arid landscapes) at various points along the route to the goldfields including the Fraser Canyon and Lady Franklin Rock; examples of civil engineering as such as bridges; homes and ranches as well as accommodations such as roadhouses and hotels (70, 83, 108 and 150 Mile Houses, Pioneer Hotel, Van Winkel Hotel at Stanley, Colonial Hotel at Soda Creek and the Hastings Hotel) and businesses (Masonic Hall at Barkerville) in colonial service towns and mining communities and settlements. Indigenous communities do not appear to be identified in lantern slide captions, though the geographical regions documented in slides reflect many traditional Indigenous territories in which the Fraser River gold rush traversed and was situated. It appears that traditional Indigenous fishing methods are present in some views, likely in those of the Fraser River. Several photographs of geological specimens (gold nuggets) are included within the set. There appear to be very limited images of regional wildlife. There are a small number of group photographs reflecting the diverse population of gold miners, pioneers and travelers of the Interior B.C. (“Crew of SS "Nechacco"), including women and children. The views from the 1920s, appear to reflect A. H. Maynard’s trips to Barkerville, the Cariboo Road(s) and the Cariboo region. Finally, there are several views described as from the period in between 1868 and the 1920s. These slides depict views including those of the Fraser Valley region by F. Dundas Todd, a surveying team in “East Kootenay” and a few images described as the Okanagan.

A smaller collection of lantern slides (accession 198203-066) feature a random mix of Fraser River gold rush era views, military subjects, theatrical entertainment and other topics. Many slides appear to be images reproduced from works of art, books and other published materials. Documentation of theatrical productions include images of scenes and portraits from Shakespearean plays (Macbeth, Othello, A Winter’s Tale), as well as Anne Hathaway's cottage. It also includes documentation of the destruction of religious institutions during World War I, primarily in Ypres. Some of these slides indicate “mounted by Edgar Fleming, Victoria, B.C.”

Another collection of photographs (accession 198201-068) consist of 107 black and white flexible film negatives depicting Canadian and American views taken between the period of May and June 1914. These include views include of Bowmanville, Toronto and Niagara, Ontario in May 1914; Rochester and New York, New York in May and June, and the "Rio Grande" in Colorado in June of the same year. Photographs of American destinations such as San Francisco, Philadelphia, Atlantic City including Freemount Park, Salt Lake and [Ogden], Denver and Washington, DC are here. Several locations on Vancouver Island identified as Victoria, Saanich and Mill Bay also housed in this group of photographs. This unit also includes film negatives described as “C.P.R.y [Railway] 1914”. 25 copy prints were made from these negatives due to deterioration of original film negatives.16 images of Bowmanville and Toronto in May 1914 and 9 images of Vancouver Island including Victoria, Saanich and Mill Bay are available. 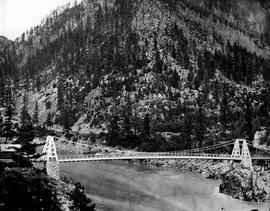 Item consists of a photograph of the Alexandra suspension bridge across the Fraser River, built in 1863. 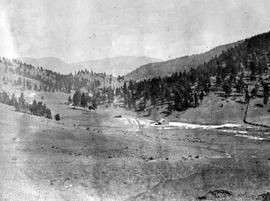 Alkali Valley. 93 miles above Yale on the Cariboo Wagon Rd.

Alkali Valley, between the Thompson and Bonaparte Rivers. 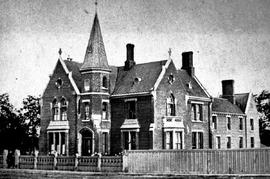 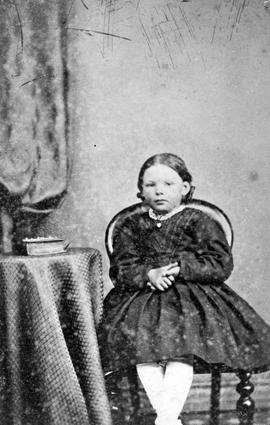