The item is a microfiche copy of a thesis by Dale Raymond Loewen titled "The role of the medical health officer in British Columbia." viii, 82 leaves: tables. Thesis (M.Sc.)., University of British Columbia, 1979. Bibliography: leave...

The Commissioners, David V. Bates, James W. Murray and Vaulter Raudsepp were appointed in 1979 to inquire into the adequacy of existing measures to provide protection in all aspects of uranium mining in British Columbia especially as to worker and...

Records of the Provincial Health Officer

SUPPLIED TITLE OF TAPE(S): Provincial Health RECORDED: [location unknown], 1976-03-16 SUMMARY: TRACK 1: Born in 1926 in Northern Ireland; early schooling and university at Queen's in Belfast; why he got into medicine; liked orthopaedics; int...

Provincial Board of Health glass negatives and slides

The series consists of glass slides and negatives created by the Provincial Board of Health from 1922 to 1932 and ca. 1946. The photographs were created to document the infectious diseases of leprosy and smallpox, 1922 to 1932, and the slides in ...

Health records with regard to disease outbreaks

Newspaper clippings and other material

This series consists of newspaper clippings concerning public health and the campaign to establish an institution for the treatment of tuberculosis. Includes one photograph, "Lepers at D'arcy Island".

The series consists of correspondence and indexed letterbooks from 1906 to 1913; ledgers, cash and voucher books and other financial information from 1906 to 1921 and a clipping book, 1915 to 1920, from the B.C. Anti-Tuberculosis Society, which es...

The series consists of a newspaper clipping book and loose clippings concerning venereal diseases created by the Dept. of Health between 1936 and 1943.

The series consist of five newspaper clipping books created by Public Health Branch between 1916 and 1925.

Records of Dr. Richard Gordon Foulkes with regard to health care in BC

Dr. Richard Gordon Foulkes was appointed as a Special Consultant to the Minister of Health in 1973. His terms of reference were "to present recommendations which could lead to a rationalization of health care services of the Province".T... 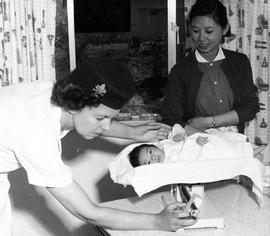