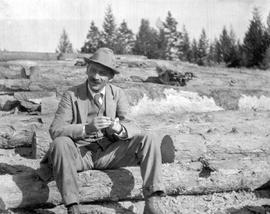 A man with a pile of logs.

This series consists of records of the 1988 Strathcona Park Advisory Committee (SPAC) under the Ministry of Environment and parks. The committee collected public input regarding the future uses and management of Strathcona Park. The majority of re...

The series consists of records created by Cabinet committees, Deputy Ministers' committees and various sub-committees between 1969 and 2001. Records include agendas, records of decisions, and meeting minutes as well as related reports, briefi...

British Columbia. Office of the Premier

This series consists of background materials used by members of cabinet in the creation and approval of orders-in-council (OICs) and Ministerial Orders, from 1989-2001.The majority of these records are information sheets or resumes which identify ...

British Columbia. Office of the Premier

Records of the Attorney General

The fonds consists of correspondence, minutes, reports, newsletters, membership lists, clippings, a scrapbook and printed matter. The records date from the period when the society was known as the Society for the Furtherance of B.C. Indian Arts a...

The collection consists of oral history interviews with women artists in B.C.

The collection consists of artwork created or acquired by Emily Carr between ca. 1893 and 1945. This collection was acquired by the BC Archives over many years through donations and purchases. It includes sketchbooks, paintings and other artworks.

The fonds consists of 29 handwritten letters from Emily Carr to Myfanwy Pavelic, with some to her parents, nearly all written in pencil, 1942 to 1944. There is also one letter from J. Delisle Parker to the editor of Victoria Daily Times about an ...

The fonds consists of research files on Emily Carr, Arthur Pitts and the Island Arts and Crafts Society, an article entitled "My friend, Emily Carr", personal correspondence, scrapbooks and photographs, as well as sound recordings of int...

The fonds consists of Chapman's photographs, glass negatives, flexible negatives and glass positives. There is one album that contains postcards. Chapman's inventory is held in container 000340-0209 and is arranged alphabetically by subj...

The fonds consists of Clay family photographs at Shawnigan Lake and Mayne Island and on various family trips.

The series is a record book kept from 1890 to 1891 at the County Court of Cariboo for sittings at Clinton, Lillooet, Soda Creek, Barkerville, Quesnelle and Ashcroft.

Fonds consists of the personal and professional records of Ina D. D. Uhthoff and three of her paintings. The records primarily document Uhthoff's relationships with various art galleries, either regarding selling or exhibiting her works. Some...

Correspondence of the Chairman of the Western Forest Pest Committee, a committee sponsored by the Western Forestry and Conservation Association. The purpose of the committee was to coordinate public and private pest control activities in Western ...

The fonds consists of photographs taken by Alfred Dresser, and perhaps also by his sons, Jack and Frank. The photographs consist of common activities (such as going to the beach, picnics, rowing, cycling), local events (regatta at the Gorge, Royal...

The Charles Edwin Fripp fonds consists of photographs and sketches created and accumulated by Fripp during his time as a resident of British Columbia. Some of the images are linked to his work as an illustrator and correspondent for various publi...

Conference on the Family reports, questionnaires and petitions

This series consists of records of the Conference on the Family from 1975-1977. Records include reports and recommendations of the conference; questionnaires and group recorder reports collected for a study conducted by the conference entitled &qu...

British Columbia. Ministry of Human Resources. Conference on the Family

This series consists of land management files from the Resource Analysis Branch (RAB) of the Ministry of Environment, 1976-1979. The RAB was responsible for environmental data collection and analysis and worked with other branches and ministries t...

British Columbia. Ministry of the Environment

This series consists of informations, warrants and convictions from the Nanaimo district. Records may be from the Nanaimo County Court, Supreme Court or Magistrate's Court. Informations are forms in which a witness submits evidence against so...

The collection consists of single items, reports, photocopies, photographs and other small collections donated and loaned to the BC Archives which document all aspects of the political, economic, social and cultural history of the province. They a...

McKenzie advertising for a "Teacher for the Settlement of Vancouver's Island" (1852); letter from the Rev. Edward Cridge, recommending the appointment of Henry Claypole as teacher (1859); and letter from the Duke of Newcastle, recom...

The series consists of orders-in-council arranged numerically by year and then by OIC number. The series also includes some maps and text attachments which were transferred in 1974 from the Dept. of the Provincial Secretary. The records were cre...

This series consists of three record books from the Smithers Police Court, from 1926-1956. Many charges related to offences allegedly committed by Indigenous people under the Game Act for hunting, fishing and trapping.The first volume is an offenc...