The item is a travelogue film. 'Sunshine and flowers - thus it is that one thinks of Victoria, the capital of British Columbia. Its enterprising business district is only overshadowed by its beautiful gardens. Such places of interest as Beacon Hill Park, the Mayor's Garden, the Dominion observatory (which houses the second largest telescope in the world) and the Butchart Gardens, are famed across the continent.' Scenes include a map of Victoria and Vancouver with a line shoring the ferry route, and an aerial view of Victoria, Inner Harbour and CPR ferry entering. Parliament Buildings. Empress Gardens and Hotel. Pan of cars driving along Causeway toward Belmont Building. Two shots of busy street corner (Yates & Douglas?). Beautiful homes and gardens along Rockland Avenue (?). Mayor Pendray's topiary gardens with visitors. Exterior shots of Dominion Observatory. At Butchart Gardens: Italian Garden, child with clay rabbit and Sunken Gardens. Very picturesque shot of the Parliament dome through the veranda portal of the Empress Hotel. (Colin Browne).

the item is a travelogue film. "An animated curtain rises to reveal waves washing in on a sandy beach. [Long shot of] Hatley Park castle from pond at bottom the garden, a rowboat passing by. "Princess Kathleen", CPR ferry, arrives in Victoria's Inner Harbour with visitors crowding the decks. [Close-up of] passengers along the rails as ship passes. Empress Hotel over the after deck of the "Kathleen". Passengers leave the ship, down gangways into a shed. Car driving along ramp out of a ferry named the "Olympic", under a sign reading: "Come again, Au revoir. For information apply Victoria Publicity Bureau." Several other cars disembark. Good aerial view of Inner Harbour, Customs House, CPR ferries and etc. from top of Parliament Buildings; pans across to Empress Hotel. Sign on a building reads: "New England Cafe -? ? ? - Ask anybody". Also good [long shot of] old Post Office, Belmont Building, streetcar passing on Causeway. A man and a girl examine a rose bush in the Empress garden. Ladies in Mayor Pendray's topiary garden look at a sitting bear, a fat bird, a bird's roost, etc. CPR ferry in [background]. Old codgers lawn bowling. Oak Bay golf course with golfers and CPR ferry sailing by in [background]. Swimming and diving in the Crystal Gardens. "Empress of Japan" in Esquimalt dry dock. Shot down Moss Street (?) with Olympic Mountains in distance. Mount Baker in far distance from Malahat overlooking Pat Bay. Car driving over Malahat Drive -- several shots including one down Finlayson Arm. A car travelling through the forest over a dirt road; a man & woman walk through ferns beneath the trees. Two couples hold hands around the base of a large tree. Car continues through forest. A speedboat, perhaps on Cowichan Lake. A gracious tea being served outdoors by a maid dressed in black, somewhere on the Oak Bay Golf Course, with the ocean & Olympic mountains in [background]. Curtain comes down over beach scene from beginning of film." (Colin Browne)

Amateur film. Footage of the Parliament Buildings, Inner Harbour, Empress Hotel (ca. 30 feet) and the exterior and interior of the Crystal Garden, including the ballroom and swimming pool (ca. 50 feet). 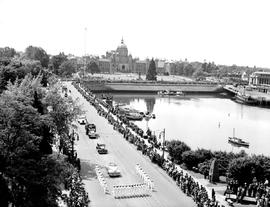 May 24th celebrations; parade going north to Government Street along the causeway.

Looking down causeway to Parliament Buildings. CPR steamship terminal on the right. 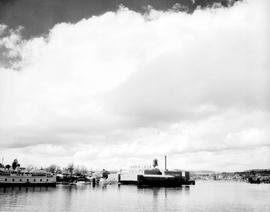 Footage. Island Tug & Barge vessels and operations on the BC coast and the open Pacific. The first roll, which relates specifically to the operation of the tugs "Sudbury" and "Sudbury II", comprises outs from the film SAGA OF THE SUDBURYS (shot by tug skipper W.H. Blagborne and produced by Parry Films for IT&B). The second roll (which does not relate to the SUDBURY film) shows a barge removing the span of the old Point Ellice Bridge in Victoria; the opening of the new bridge in 1957; a tug towing a scow to Nitinat Bar; the tug "Lloyd B. Gore" towing the old sternwheeler "Delta King" to San Francisco; the "Island Sovereign" towing a dredge platform at sea; vessels at dock in Victoria.