The item is a microfiche copy of a thesis by Dale Raymond Loewen titled "The role of the medical health officer in British Columbia." viii, 82 leaves: tables. Thesis (M.Sc.)., University of British Columbia, 1979. Bibliography: leave... Alert Bay; tuberculosis poster contest winners; "TB Thrives on Superstition" and "TB Respects No One - Have An X-Ray" 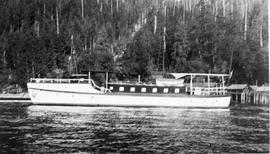 The provincial board of health patrol and quarantine boat "Sanita" at the Goliath Bay logging camp, during a typhoid outbreak Fight the flu! How to avoid the Spanish influenza and how to do your bit to check the prevailing epidemic. Do you value your own and neighbor's life?

Pamphlet about the Spanish Influenza; published by the Nanaimo Board of Health. The series consist of five newspaper clipping books created by Public Health Branch between 1916 and 1925.

The series consists of a newspaper clipping book and loose clippings concerning venereal diseases created by the Dept. of Health between 1936 and 1943.

Newspaper clippings and other material

This series consists of newspaper clippings concerning public health and the campaign to establish an institution for the treatment of tuberculosis. Includes one photograph, "Lepers at D'arcy Island".

Provincial Board of Health glass negatives and slides

The series consists of glass slides and negatives created by the Provincial Board of Health from 1922 to 1932 and ca. 1946. The photographs were created to document the infectious diseases of leprosy and smallpox, 1922 to 1932, and the slides in ...

The Commissioners, David V. Bates, James W. Murray and Vaulter Raudsepp were appointed in 1979 to inquire into the adequacy of existing measures to provide protection in all aspects of uranium mining in British Columbia especially as to worker and...

Health records with regard to disease outbreaks

Records of Dr. Richard Gordon Foulkes with regard to health care in BC

Dr. Richard Gordon Foulkes was appointed as a Special Consultant to the Minister of Health in 1973. His terms of reference were "to present recommendations which could lead to a rationalization of health care services of the Province".T...

Spotlight on B.C. ; Government - at your service : government and public health

SUMMARY: 1. "Spotlight On B.C." is a series that looks at present-day (1960) communities in British Columbia. Each program "spotlights" an area to provide students with greater awareness of the province. Prepa;red for Social St...

Records of the Provincial Health Officer

The series consists of correspondence and indexed letterbooks from 1906 to 1913; ledgers, cash and voucher books and other financial information from 1906 to 1921 and a clipping book, 1915 to 1920, from the B.C. Anti-Tuberculosis Society, which es...

News footage. Interviews with Murray Glazier and a health official about Victoria's sewage system and possible transmission of disease.