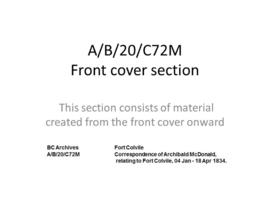 The series consists of a partial letterbook of outward correspondence kept by Archibald McDonald while stationed at Fort Colvile in 1834 as Chief Trader. The first 9 pages contains copies of letters, then there is a 14 page narrative or report by...

Land records relating to the sale of townsite lots

Correspondence inward from the Deputy Minister of Agriculture requesting lower charges for soil analysis for members of farmers' institutes.

Report of the Chief Inspector of Mines, regarding a mine explosion at Diamond Vale Collieries Ltd.

Report of the Chief Inspector of Mines, regarding a mine explosion at Diamond Vale Collieries Ltd., Merritt, B.C.

Curriculum circulars containing announcements, changes, directives and rulings from the Division of Curriculum. These circulars were sent to all school principals with instructions that they should be kept on file and made available to all teache...

Records relating to the Peace River and Mackenzie River basins, from correspondence file 0309728. Consists of a preliminary report on the Peace River basin flood, 1972, by the Inland Waters Branch of Environment Canada and records of meetings of t...

Correspondence relating to safes and locks at the Parliament Buildings

Miscellaneous correspondence relating to safes and locks at the Parliament Buildings. Includes a letter to F.M. Rattenbury from M.W. Waitt re vault door combinations.

Letterbook of correspondence outward, 7 January 1918 to 21 January 1918 (1 vol.) Includes letters of the Chief Forester, the Deputy Minister of Lands, and the departmental accountant. Nominal index.

Minutes "relative to the Indian troubles on the Skeena River," 1888; dispatches, reports, and correspondence concerning relocation of Songhees Indian reserve, 1893-1896; Report on British Columbia for Royal Colonial Institute (for use in...

"Departmental Circular for Inspectors, Directors, and other Officials."

Evidence concerning a bush fire which occurred on July 4, 1896 near Port Moody submitted to the Deputy Commissioner of Lands and Works by the Government Agent at New Westminster and others.

Students' outlines for courses on forest mensuration, range management, research activities of the BCFS, scaling and silviculture given at the Ranger School at Green Timbers.

The series consists of a photocopied file list of 0 series correspondence files, showing disposition of files. It was created by the Surveys and Land Records Branch in 1982 from a computer print-out.It includes references indicating the following...

Briefs submitted to the Minister of Lands and Forests

Briefs submitted to the Minister of Lands and Forests regarding proposals by Eurocan Pulp and Paper Co. Ltd. and Crown Zellerbach Canada Ltd. for the establishment of a mill at Kitimat, B.C. The briefs are grouped into four sections: (1) General, ...

The series consists of the Dept. of Public Works central registry files including the building and subject file register and index.The files are arranged by file code and are stored in over 300 containers (000329-0001 to 000329-0369). In order to...

Report of the Division of Botany and Plant Pathology, Central Experimental Farm, Department of Agriculture, Ottawa

Report by Irene Mounce of the Division of Botany and Plant Pathology, Central Experimental Farm, Department of Agriculture, Ottawa on the "Forest Mycology of British Columbia, May-October 1938". The paper contains a report on the work of...