CALL NUMBER: T0658:0001 RECORDED: [location unknown], 1963-03-13 SUMMARY: TRACK 1: Mr. Gus Milliken tells many stories from many different sources about the area around Yale. The first story takes place during the gold rush about a man who sells another man a claim to a mine which turned out to be a gravel mine, not a gold mine. Several other prospecting stories, some of which are fictitious. Early stories about the sternwheelers, including an argument between an engineer and the captain of a steamship; legends about the packer Cataline (Jean Caux); pack mules near Lytton; March 1858; a man named Hill, who discovered the first gold along the Fraser; the first hotels in the area; Joe MacKenzie, an original '58er; Ned Stout; Dewdney Landing; Bill MacKenzie, orchards, the building of the CPR station at Yale; some historical facts about the town of Yale; the first sawmill, first town council and first white male born in BC, Chinese miners and old timers. TRACK 2: Mr. Milliken describes how Yale got its name; its origins as a fort in 1846; the Hudson's Bay Company; the first buildings in Yale, L.T. Hill as the first person to discover gold in 1858; the relationship between the Hudson's Bay Company and San Francisco; the original Fort Hope, the people who worked in the first gold mines, activity in the area as it was being established, the first post office in 1916, Hope as a gold mining town; prospectors who had to move on to other places because all of the land had been staked; a dynamite plant; other early homes.

CALL NUMBER: T0658:0002 RECORDED: [location unknown], 1963-03-13 SUMMARY: TRACK 1: Mr. Milliken continues describing Andrew Onderdonk, who was "supposed to have built the railway but who was in fact the engineer". He describes the American company that paid for the building of the railway from Emory to beyond Yale. He discusses the construction of the railway; the first roads in the area; Indian trails in the area, including Douglas Portage and how Mr. Yale named it; he describes Mr. Yale; gold in Rock Creek; the Kettle Valley and the Canadian National Railroad [sic]; mills in the area; the Hope-Nicola trail and other trails.

RECORDED: [location unknown], [196-] SUMMARY: TRACK 1: Mrs. Rose Skuki describes salmon fishing and how the fish is prepared; her earliest memories of Lytton; farming; the white people who settled in the area; mining; schooling in Yale; and the Fraser River. [TRACK 2: blank.]

RECORDED: [location unknown], 1965-11-04 SUMMARY: TRACK 1: Mrs. Gladys Young, wife of Benjamin Franklin Young, discusses some of her experiences between 1900 and 1914. She begins with an anecdote about her arrival in Armstrong to teach in 1908; people in Armstrong; Greenwood in 1900; her family background and impressions of Greenwood; returning to Greenwood from school in Yale; a discussion of life at All Hallow's Girls School at Yale; more on Greenwood; schooling in Vancouver; how she came to Armstrong; impression of Lansdowne and Armstrong; the beginning of Armstrong including people and life there. [TRACK 2: blank.]

Footage. This is a compilation of footage showing motoring through the Fraser Canyon from Hope to near Lytton. Depicted at length are the canyon gorges and the turbulent Fraser River, as well as the highway and railway routes along the steep canyon walls. Also shows motorists' accommodations en route: Fort Hope Tavern, All Hallow's Lodge (Yale), and Alexandra Lodge. 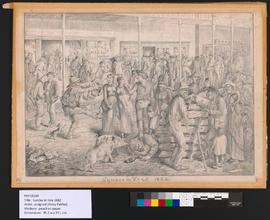 Group At All Hallows Church, Yale. Item consists of a documentary video which addresses the decision-making procedures of the Ministry of Forests when confronted with ecological and other values in forestry resource management. Specifically, the video deals with the spruce budworm, a moth larvae, and whether chemical sprays should be used on trees in the Fraser Valley. Minister of Forests, Tom Waterland, hosts an interdisciplinary conference to discuss the issue. The video also addresses how media coverage and public response to these issues.

This series consists of land records from the Colony of British Columbia Lands and Works Department, 1858-1863. Most records are related to the sale of town lots at Langley, 1858-1859, and New Westminster, 1860-1862, including records of exchanges of lots at Langley for lots at New Westminster. The series also include various other land records related to New Westminster, Douglas, Hope, Yale, Lytton and Lillooet, including pre-emptions, lot registers, accounts for sales of town and suburban lots, and lists of deeds issued. A hall being used as a school, Yale.

The item is a stereo print taken by Richard Maynard in 1881. It shows the acid works at Yale, used for manufacturing explosives. Yale, After The Fire. Canada. Department of the Interior