Guy (Lowenberg) Constable was born at Bury, Lancashire, England in 1882. After taking an engineering degree at Arnold Technical School in Chester, England, he served a period of indenture with Sandycroft Engineering Company of London, England. In 1904, he came to Canada to open and supervise the Alice Mine on Goat Mountain at Alice Siding. During the 1914 to 1918 war, Guy Lowenberg changed his name to Constable. From his arrival in Canada until his death in 1973, Guy Constable involved himself in many facets of the life of the Creston Valley and Kootenay district. Prime among his interests was the reclamation of Kootenay flats, and the development of the Columbia-Kootenay watershed. He also took a keen interest in the development of the fruit growing and grain farming in the Creston Valley, and had a longtime involvement in the Associated Boards of Trade of Southeastern British Columbia and the Pacific Northwest Trade Association. Guy Constable was an organizing partner of Creston Power, Light and Telephone Company (1907), a founding partner of the Creston Review (1910), a notary public (1911), justice of the peace (1912), an organizer of the Creston Valley Stockbreeder Association (1919), a frequent contributor to the deliberations of the International Joint Commission (first in 1927), manager of Kootenay Valley Power and Development Company (1928-1931), chairman of the board of trustees of the Creston Dyking District (1937), a charter trustee of the consolidated Creston Valley School District (1938), a member of the Committee on Western Grain Standards of the Board of Grain Commissioners (1940), chairman of the industrial subcommittee on the provincial Bureau of Reconstruction after World War II, stipendiary magistrate and juvenile court judge (1949) and a director of the Western Canada Reclamation Association (1947-1950).

The records consists of correspondence inward and outward, memoranda, reports, clippings and printed matter. Among the papers are copies of provincial and federal documents relating to the development of the Columbia-Kootenay watershed.

Memorandum to Chief Commissioner of Lands and Works re Kootenay bottom lands, A.S. Farwell, Surveyor General of BC

Copies of correspondence re Kootenay reclamation The Alice Mine concentrator, Creston. Laying steel on the Nelson to Bedlington railroad.

Map of Lands B in the Lower Kootenay Valley, British Columbia 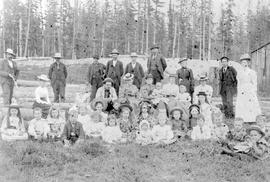 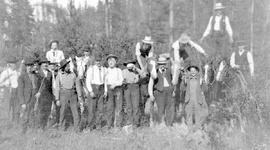