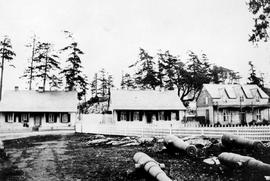 Three frame structures built during the Crimean War at Esquimalt; built by Governor Douglas in answer to Admiral Bruce's request for a temporary hospital for his squadron.