This series contains the log of the Forest Branch launch "Cherry".

The series contains a letterbook of correspondence outward, dating from 7 January 1918 to 21 January 1918 (1 vol.). The book includes letters of the Chief Forester, the Deputy Minister of Lands, and the departmental accountant. Included with the ...

This series contains the Chief Forester's correspondence inward and outward. 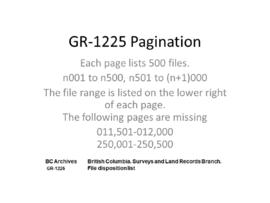 The series consists of a photocopied file list of "O" series (O files) correspondence files, showing disposition of files. It was created by the Surveys and Land Records Branch in 1982 from a computer print-out.It includes references in...

Report of the Division of Botany and Plant Pathology, Central Experimental Farm, Department of Agriculture, Ottawa

This series contains a report by Irene Mounce of the Division of Botany and Plant Pathology, Central Experimental Farm, Department of Agriculture, Ottawa on the "Forest Mycology of British Columbia, May-October 1938". The paper contains ...

Speeches by the Chief Forester

This series contains various financial documents originating from the Forest Branch trust account. Types of records in this series includes a cash book and accounts ledger in one volume. This volume contains a list of cheques issued on the Forest ...

The series consists of photographic negatives, prints, and transparencies created by the Ministry of Forests and its predecessors including the Forest Service and Forest Branch. Series documents forest service personnel and activities relating to ...

The series consists of invoices for building rentals, timber mark hammer purchases, and other items for forest districts handled by the central records office of the Forest Branch and later the Forest Service in Victoria. Records are arranged by f...

This series consists of special use permit files relating to forest lands. The Forest Branch, and its successor agencies, approved these permits to give municipalities, companies and individuals the authority to use Crown forest land for a variety...

Transcript of a public meeting regarding the Timber Royalty Act of 1914, held at the Parliament Buildings, Victoria, B.C., 3 September 1924, between John Oliver, Premier, T.D. Pattullo, Minister of Lands, A.M. Manson, Minister of Labour and repres...

This series consists of patrol diaries of forest protection patrolman, Eric Bergenham, of North Vancouver, May - September 1929 and May 1930.

Report on the timber conditions in the Peace River Division

This series contains a report on the timber conditions in the Peace River Division submitted to the District Forester by George Townshend, Division Ranger.

Research Division reports and other material

This series contains an outline of the work of the Research Division with reports on general reforestation investigations, studies of forest yield, work done at the Aleza Lake and Cowichan Lake Experiment Stations, as well as reports on the Experi...

This series contains a transcript of a hearing before the Minister of Lands and Forests regarding the application of Canadian Forest Products for a tree farm licence in the Nimpkish River region.

This series contains reports presented to the Forestry Committee of the Legislative Assembly by the Chief Forester. The 1936 Report was further amplified by a presentation by the Forester in charge of the Forest Surveys Division, and the 1940 Rep...

This series contains records from the Department of the Interior particularly General Township Registers for the Coast (also called New Westminster) Division of the Railway Belt. The records are annotated by Forest Branch, ca. 1927, to show forest...

The series consists of Forest Service personnel photographic prints and negatives created by the British Columbia Forest Service between 1913 and 1982. The photographs are arranged alphabetically by the last name of the employee. The photo print...

The item is a licenced scaler certificate issued by the BC Forest Branch.