"A scene in the Canadian Rockies; the station at Glacier, with Mount Sir Donald in the distance"

"C.P.R. TransCanada Limited, near Field, BC"; note the open-air observation car in the rear "Driving a last spike in the old days" 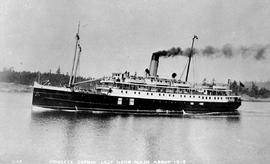 A trip over the Rocky and Selkirk Mountains in Canada

Documentary. "This documentary-type film was made by Edison's troupe during their trip across Canada shooting promotional films for the CPR during the summer of 1910. All but one of the others are dramatic shorts but, alas, most are lost...

RECORDED: [location unknown], 1964-11-08 SUMMARY: TRACK 1: Mr. A.H. Soles discusses early settlement in the Columbia Valley and the Kootenay Central Railroad; he describes how he came from Ontario to Golden in 1898; the various steamboats and the...

The fonds consists of McLean's survey book for a survey near Edmonton.

RECORDED: [location unknown], [196-] SUMMARY: TRACK 1: Mr. Alex Wylie discusses hiking near Hinton in 1905 with some traders as he moved to BC; moved to Alberta from Scotland; describes the fort at Edmonton; he describes how he became a packer in;...

The fonds consists of Alexander Begg's letterbook and questionnaires distributed by the Canadian Pacific Railway Land Department to settlers in the North West Territory and a manuscript of the "History of the North West".

The fonds consists of photographs depicting the construction of the Canadian Pacific Railway, Pacific Section, including views of landscapes, tunnels, structures, construction workers, First Nations along the route, and portraits of the Onderdonk ... Arrival of Their Royal Highesses the Duke and Duchess of Connaught on the SS Abyssinia in Vancouver.

RECORDED: [location unknown], [196-] SUMMARY: TRACK 1: Mr. Arthur Chadwick discusses his family history in Wisconsin all the way back to the American Civil War. He was born in 1885 and came to Canada by himself in 1907 to Alberta. Not liking A;...

The fonds consists of Green's diaries relating to survey work for the Canadian Pacific Railway and a survey of Saltspring Island.

RECORDED: [location unknown], 1965-05-22 SUMMARY: TRACK 1: The Honourable Basil Aylmer describes the Aylmer family history. Then he discusses coming to Queens Bay; building a house; World War I; starting a farm; and his family and neighbours. T...

Between ourselves : The Luck of La Chance ; Folk songs

SUMMARY: "Between Ourselves" was a weekly series of hour-long radio programs that presented Canada to Canadians. It featured aspects of Canadian life in docudramas, plays, music, and interviews, originating fr;om different regions of Can...

RECORDED: [location unknown], 1965-03-09 SUMMARY: Mr. E.W. (Bill) LaChance recalls his experiences working as an locomotive fireman and engineer for the CPR, based in Revelstoke. This interview mainly relates his story as the sole survivor of the...

The collection consists of photographic negatives that mainly depict railway operations in western Canada, particularly British Columbia, from 1886 to 1966. The collection was accumulated from photographs shot or collected by Albert Paull, Roy Jen...

RECORDED: [location unknown], 1964-09-08 SUMMARY: TRACK 1: Mr. Boyd Campbell Affleck came to the Kootenay/Arrow Lakes region in 1907 from Ontario. He took up a surveying job near Nakusp. He discusses settlers and speculators. He describes Fruit...

The fonds consists of Hanington's letterbook.