The file consists of speeches given by S.N.F. Chant (Dean of Arts at the University of British Columbia between 1949 and 1964): On university freedom, 1967, and The future of higher education in British Columbia, 1969.

Papers of the Educational activities subcommittee of the Canadian Confederation Centennial Committee of B.C.

The series consists of papers of the Educational activities subcommittee of the Canadian Confederation Centennial Committee of BC created by the Dept. of Education between 1964 and 1967.

The series consists of two presentation albums given to the Minister of Education on official occasions. The first album was presented to minister L.R. Peterson on May 17, 1957 on the occasion of the official opening of Prince George District sen... 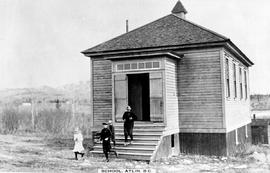 Records with regard to teacher training and certification

The series consists of records pertaining to teacher training and certification. It includes minute books of the Board of Examiners (1884-1949), teachers certificate registers (1892-1947), student registers at provincial Normal schools (1901-1938...

The series consists of videotapes transferred to the archives from the B.C. Department of Education. The items are educational television programs produced by the Canadian Broadcasting Corporation (CBC Vancouver) and sponsored by the Department o...

The series consists of records created by the Dept. of Education between 1953 and 1970. There are two files of collected statistical reports on B.C. schools, 1953-1964 and 1965-1970. The statistics gathered cover the following subjects: adult ed...

This record series is composed of the 1960-1963 files of the then Minister of Education, the Hon. Leslie Peterson. The files contain his ministerial correspondence and briefs that he received as a member of the cabinet. The filing system is not ...

This record series was maintained by the Administrative Services Branch of the Department of Education and relates to almost every facet of the Department's work. It includes correspondence of the Minister and department staff with the publi...

The series consists of miscellaneous documents gathered together by the Dept. of Education library:(1) Report, Frontier College - Promoting Citizenship Among Migratory Workers in British Columbia, 1951 (includes photographs)(2) Receipts, by school...

The series consists of School Inspectors' reports created by the Dept. of Education between 1918 and 1957. The reports are arranged alphabetically, by name of school or community, for the years 1918-1938; thereafter, reports are filed alphab...

The series consists of correspondence files created by the Assistant Superintendent of Education between 1965 and 1968.The files deal with a broad range of topics, including teachers' conferences, data processing, school inspectorates and sta...

Report of the Board of Arbitration established under the Residence and Responsibility Act (1936), including correspondence of the Board pertaining to cases arbitrated; report of the Commission of Inquiry into Educational Financing (Cameron Report,...

British Columbia. Dept. of Municipal Affairs. Office of the Minister

Finney joined the Royal Air Force in 1924 as a Pilot Officer and immigrated to Canada in 1929. He moved to British Columbia from Montreal in 1933 and prepared aviation correspondence courses for the Dept. of Education, was active in the Aero Club...

The series consists of press releases from the office of the Minister of the Dept. of Education from 1963 to 1972. The press releases cover all aspects of provincial education. The ministers during this period were as follows:1963-1968 L.R. Pete...

The collection consists of four films showing young women taking part in massed calisthenics, folk dancing and other "Pro-Rec" activities, organized under the auspices of the Provincial Recreation Movement.

Correspondence, minutes, briefs, memoranda, etc., of the Council of Public Instruction. Most of the records in this unit date from the 1967-1970 period. Included are records relating to Indian schools, private schools, universities and colleges,...

Includes suggested draft for 1872 Public Schools Act by Thomas Nicholson (1871), correspondence re: school at Burton's Prairie (1882) and correspondence re: request for an additional teacher at New Westminster High School (1889).