The series consists of photographs of engineering projects managed by the Dept. of Public Works. The photographs consist of glass lantern slides, some numbered. The views photographed include bridges, road works, buildings and general views and may have been taken between 1859 and 1930. Many of the slides are credited to J. Howard A. Chapman, a well known photographer based in Victoria between 1895 and 1936.

This unit consists of plans, renderings and photographs prepared in connection with two calls for tenders on the dry dock in Thetis Cove, Esquimalt Harbour (now called Naden Graving Dock). The first call was published in the British Columbia Gazette beginning Nov. 25, 1871. The submission of Thomas A. Bulkley was the only tender (plans in item 1) received by the deadline of Mar. 20, 1872, and this was rejected. Mr. Bulkley was then hired as Chief Engineer to the British Columbia Government. He was responsible for, among other things, preparing plans and specifications to be put at the disposal of bidders when the Government invited further tenders beginning Apr. 27, 1872 (closing Nov. 15, 1872). These latter plans form the bulk of the unit.

Received from Ministry of Transportation and Highways, 1987.

The series consists of photographs of engineering projects managed by the Dept. of Public Works. The photographs consist of both prints and negatives. The projects photographed include bridges and roads and were taken between 1891 and 1957.

This series consists of correspondence and other records from the Department of Lands and Works, and its successor, the Department of Public Works. Records include correspondence inward and tenders for Victoria Court House, 1900-1904, Government House, 1900-1904, and Parliament Buildings, 1900; specifications for Victoria Graving Dock; specifications and agreement for Lytton highway bridge, 1913; and weekly building progress reports, Government House, 1957 (reports 30-75 only).

The series consists of files created by the Dept. of Highways (and its predecessor body, the Dept. of Public Works, Highways Branch) in 1907 and between 1933 and 1957. Most of the files refer to the First Narrows Bridge Company and seem to have been transferred to government when the British Columbia Toll Highways and Bridge Authority acquired the shares in the company and took over the First Narrows Bridge (also known as the Lions Gate Bridge) in 1955. The files concern trust deeds, articles of association, correspondence and various other documents about the company and include two technical drawings of the bridge and its approach through Stanley Park (box 2, folder 4).

The series also includes two files of invitations, received and declined, of the opening of the King George VI Highway in October 1940, a single file with a partial transcript of a 1954 hearing before the Committee of Forestry and Fisheries and a single file from 1907 regarding a proposed bridge at Second Narrows, Burrard Inlet.

The series consists of pamphlets, brochures, and advertisements describing products and services offered by diverse companies in connection with Public Works construction and maintenance programmes, from between ca. 1910 and 1960.
The material was culled from the Public Works correspondence files before microfilming.

This series contains correspondence relating to the ferry at Hope, B.C.

Series consists of photographs created by the Department of Public Works to show various engineering projects, 1912-1935. The photographs are arranged in albums and each one documents separate projects including bridge construction and road works.

The series consists of photographs of engineering projects managed by the Dept. of Public Works. The photographs were held in the Office of the Senior Bridge Design Engineer and consist of both prints and negatives. The projects photographed include bridges, roads, ferries, machinery, damage, buildings, topography, culverts, miscellaneous structures, portraits, signs, events and accidents. While almost all of the photographs were taken in British Columbia ca. 1913-1954, there are also photographs of engineering projects in the United States. The photographs, including negatives, were kept in envelopes, either large or small, and were filed by a three part number system. The first part of the number refers to a map square, the second part of the number refers to the classification and the third part is the project number. Details about the project were typed on the envelopes along with the file number. Each envelope contains photographs and negatives of that particular project and each photograph has an individual number, usually a sub-set of the file number.

Unsigned copies of Public Works contracts specifications, and other agreements

Unsigned copies of contracts, specifications, and other agreements concerning the offices of the Government of British Columbia at Nos. 1 and 3, Regent Street, London, England (BC House). Part of file number 1363.

Correspondence relating to the construction of the Vernon Court House

This series contains correspondence relating to the construction of the Vernon Court House.

Series contains copies of correspondence between the British Columbia Minister of Public Works and the Dominion Deputy Minister of the Interior relating to the Banff-Windermere road and to jurisdiction within Dominion parks. 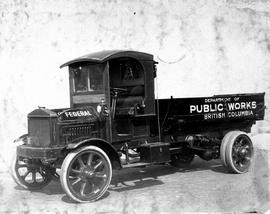 Series consists of a two drawer card file system created by the Office of the Senior Bridge Design Engineer of the Dept. of Public Works ca. 1921-1945. The card files index photographs taken or collected by the department during this period, particularly in the area of bridge building in British Columbia. The series consists of two drawers of card files; the first drawer is arranged numerically by the three part code number. The first part of the number refers to a map square, the second part of the number refers to the classification and the third part is the project number. The second drawer consists of the classification system which lists the types of structures and duplicate file cards indexing the photographs, arranged by classification number. When photographs were received by the office, they were entered into the index on the appropriate cards and then filed in either small or large envelopes arranged numerically. Each card typically contains the name of the project, the file number and a list of photographs filed in the envelope of the same file number. One card would be filed by the first part of the number (the map square) and the second card would be filed by the second part of the number (the classification).

The series consists of contract sets for diverse public works: buildings, bridges, roads and road works, ferries and ferry facilities, etc. The contract sets, usually signed by the contractor and the minister, often include the notices to contractors as they appeared in The British Columbia Gazette, tender forms, schedules of quantities, specifications, contracts, insurance policies, correspondence, and plans.

The file consists of a signed agreement from 1928 between the Province represented by the Minister of Public Works and the Canadian Pacific Railway Company (CPR). The agreement sets out compensation to be paid by the CPR for each level crossing on the Old Cariboo Road between Haig and Spences Bridge that would be eliminated by the construction of the new provincial highway.

The agreement is accompanied by a photocopied letter from 1963 from the Office of the Attorney-General to the Chief Engineer of the Dept. of Highways instructing them to keep the agreement in their active files.

This series contains the correspondence of the Minister and Deputy Minister relating to applications for the position of private secretary to the Lieutenant Governor. It includes letters from applicants.

Series consists of letters inward and newspaper clippings re construction of Essondale Mental Home and other public buildings.

The series consists of photographs taken by the Department of Public Works and stored in a central registry, 1929-1973. The photographs are of buildings designed, built and managed by the Dept. of Public Works throughout the province and include views of destroyed or old buildings, buildings in the process of being built or upgraded, interior, exterior, aerial and site shots. The buildings include court houses, schools, hospitals, prisons, universities and vocational schools, general administrative buildings and others. The photographs mostly consist of black and white prints although there are also colour prints, negatives, transparencies and one metal plate negative. A small amount of accompanying material is intermingled in the photograph files. The photographs are arranged by numerical district number and then by building number within the district.

Part of Public Works contracts and other material

The drawings show Nasookin as it was to be rebuilt according to a contract between the British Columbia Dept. of Public Works and the A.H. Green Co. Ltd., dated May 8, 1934.