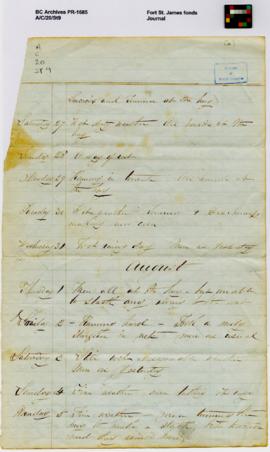 File consists of nominal rolls of soldiers at No. 5 General Hospital, C.E.F. The roll includes name of soldier, regimental number, rank, age, marital status, previous service, name of next of kin, address of next of kin, and country of birth.

File consists of one typescript document about James Abbott, an 18th century resident of Salonika. The author of the document is not known.

File consists of copies of the publication Souvenir : Canadian Discharge Depot. The publication was prepared as a memento of the last rest camp in England and provides an overview of the facilities and staff.

The history of the Fifth Canadian General Hospital by J.E. Campbell

File consists of a typescript of the history of the No. 5 Canadian General Hospital at Salonika written by J.E. Campbell

Ledger : addresses of No. 5 personnel

File consists of one ledger book containing a list of officers, including their rank and home address. E.C. Hart is the first officer listed under rank of Lieutenant Colonel. The ledger also lists nursing sisters. Pages of the Courier newsletter i...

File consists of 4 photographs relating to war service and depict Salonika, soldiers on a ship either departing or arriving, and Hart in uniform with his family.

File contains miscellaneous documents, originally kept with Hart's other war-time documents. The file contains Hart's cheques and receipts, one group photograph with individuals identified (Hart is not in the photograph), and lists.

File consists of five pieces of unrelated and undated correspondence addressed to Colonel E.C. Hart during his time in Salonika.

Ephemera : railway warrant for journeys in the United Kingdom

Collected ephemera re Salonika and WWI

File consists of one photo album with a covering page reading "With the compliments of The Granville Canadian Special Hospital, Buxton, Derbyshire." The album is unbound and one photograph per page is mounted to paper. The photograph dep...