Series contains a variety of official documents in regards to the governing of the west coast, documents regarding official governing appointments for James Douglas, an address on the occasion of Douglas' retirement, a certificate commemorati...

Anderson was a miner and manager of the Rail Road House Hotel in Yale which he co-owned with Arthur Churton, Victoria soap manufacturer. Unit contains correspondence from Churton re the hotel, various accounts, receipts, contracts and agreements,...

Robert Burns McMicking was a manager for the Victoria and Esquimalt Telephone Company (later part of the British Columbia Telephone Company) and an electrician for the City of Victoria. He was married to Margaret (Leighton) McMicking.Records incl... 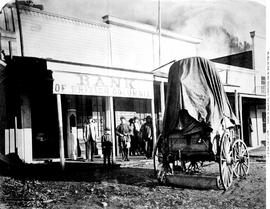