This series consists of four speech transcripts given by Minister of Highways Phil Gaglardi to the Legislature from 1959-1964. The speeches provide an overview of the work conducted by the Department of Highways for the previous year. Each speech ...

Ministry of Transportation and Highways films and videotapes

Log books of Forest Service launches including those of the MV Catherine Graham, Department of Highways Denman Island ferry, prior to her transfer to the Forest Service in 1973.

The file consists of a signed agreement from 1928 between the Province represented by the Minister of Public Works and the Canadian Pacific Railway Company (CPR). The agreement sets out compensation to be paid by the CPR for each level crossing o... 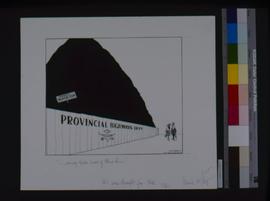 The series consists of selected files created by the Dept. of Highways between 1909 and 1963. They are arranged in file code order and contain information about roads and highways, bridges, ferries and other transportation subjects. The files in...

The series consists of 378 photographs created by the Engineering branch of the Dept. of Highways and its predecessor agency, the Dept. of Public Works between 1937 and 1969. The photographs were taken by several private commercial photographers ...

News item. The BC Dept. of Highways uses a van equipped with a special camera and other technical instruments to analyze and record abnormalities in the road surface, so the necessary repairs and reconstruction can be carried out.

The series consists of files created by the Dept. of Highways (and its predecessor body, the Dept. of Public Works, Highways Branch) in 1907 and between 1933 and 1957. Most of the files refer to the First Narrows Bridge Company and seem to have b...

The series comprises motion picture film materal shot by and for the Dept. of Highways, mainly in the 1950s and 1960s. There are also a few brief items from ca.1935-1940s, presumably shot for the Dept. of Public Works. Most of the material consist...