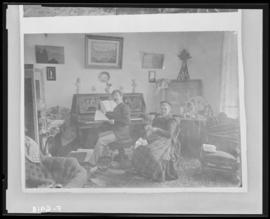 File is a family carte de visite album with a brown leather cover and metal clasps containing photographic prints, the bulk of which are card-mounted studio portraits that document the Maynard family, in particular the Albert Hatherly Maynard and Adelaide Maynard (nee Graham) family. The album is attributed to Adelaide Maynard, and appears to have been a gift to Adelaide Graham (1859-1892) from Albert Maynard (1857-1934). Photographs depict Adelaide Maynard’s domestic life before and after her marriage through primarily portraits, as well as a few snapshots and other materials that document her circle of family and friends of her and her husband, her role as a wife and a mother, and the domestic life of a Victorian family. The bulk of the photographs are credited to photographer Mrs. R. Maynard (1834-1918) but there are also works of other commercial photographers including Ontario based W.A. Cooper and JAS. Egan’s New Photographic & Portrait Gallery. The album includes popular Maynard family images that appear in other Maynard family albums.

The family album consists of 100 photographic prints, including sepia toned albumen carte de visites, plus other portrait forms such as tintype miniature portraits inserted in twenty-five pages. There are annotations found on some album pages and also on the verso of prints. Information largely consists of names and occasionally the age of the subject or the price of the print. There does not appear to be dates or associated photograph numbers for the original negatives present on album pages or prints. Mounted cards, carte de visites, often contain imprints on the verso noting the name and studio location. On nine of the pages prints appear to have been removed. There are also several prints housed loose within the album. Other materials include a few hand-painted photographs, a business card and several seasonal greeting cards which do not contain photographs.

A.H. Maynard family members are represented in individual and group studio photographs. The album includes individual and group portraits of Albert Hatherly and Adelaide Maynard, several mother and child portraits of Mrs. A. Maynard and child, as well as individual portraits of their infant children including John Ridgemen Maynard (b.1879). The album also includes portraits containing the following names in their associated captions: "Bob Liddell," "Mary Vipond," "Jack Kirkup," "G Anderson," "Frank Graham," and "J. Carter." Some of these captions refer to photographs which are missing from the album.

Likenesses of Albert Maynard’s mother (Hannah Maynard) and his siblings including Emma Maynard (1859 or 1860-1893), Zela Maynard (1854-1913), and Laura Lillian “Lillie” Maynard (1867-1883) are also featured frequently in individual and group portraits sometimes depicting domestic scenes and activities. Arthur S. Rappertie (1854?-1923) who worked for the Maynards in the 1870s to early 1900s is also present here. There are a number of unidentified prints of infants, babies, children and adults, including a number of male sitters, which may or may not relate to the Maynard family. There are several non-studio images, family photographs taken on excursions at the beach, at a group picnic, and outside a residence.

Portrait styles reflected in the album include headshots, side profiles, as well as mid and full-length likenesses that employ a variety of studio props. Several portraits of the Maynard children depict Mrs. R. Maynard’s use of side lighting techniques. Child and baby portraits, as well as those of toy dolls present in the album, are similar portrayals than those featured in Hannah Maynard’s annual “Gems of British Columbia" series of portrait montages of the 1880s and 1890s.

There are also portraits of other individuals and objects. These include commercial cartes of “Effie German,” as well as a number of portraits of children’s dolls including a tintype with the annotation “Mifs M.A. Morton” on the verso of the print. There is a business card of James F. Macdonald, the husband of Emma Maynard. The album concludes with two New Year's greeting cards: one addressed to A. H. Maynard and the other Mrs. Albert H. Maynard. File consists of one studio photographic album with a black leather cover containing 122 photographic prints, the bulk of which are a selection of sample studio portraits and less conventional works and is attributed to Mrs. R. Maynard’s Photographic Gallery. The album presents a portfolio of 19th century infant, baby, child and youth studio portraiture featuring a range of commercial options from the Maynard Studio. Photographic subjects include clients identified as being from the Harris, Redfern, Wallis and Gambie families, along with children of other families. Members of the Maynard family including Hannah Maynard, George Maynard (son of Hannah and Richard Maynard), Richard James Maynard (son of Albert H. Maynard), Harry and Maynard MacDonald (grandchildren of Hannah and Richard Maynard and children of daughter Emma Maynard) are also depicted in individual and group portraits. 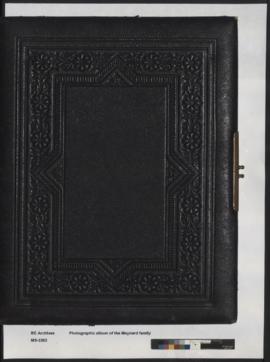 The file is a family photograph album with a black leather cover with a metal clasp containing 32 card mounted photographic prints, the bulk of which are a selection of individual and group portraits depicting several generations of the Maynard family, in particular the Albert H. Maynard and Adelaide M. Maynard (nee Graham) family. Many of the prints feature portraits of infants, children, youth and adult members of the Maynard family including Albert H. Maynard, his mother Hannah Maynard and his siblings Zela Maynard, Laura Lillian Maynard and Emma Maynard, as well as his wife Adelaide. Laura Lillian Maynard and baby Richard James Maynard appear frequently throughout the album, either in individual portraits or group portraits together or with mother and grandmother Hannah Maynard. The majority of the photographs are attributed to photographer Hannah Maynard of Mrs. R. Maynard’s Photographic Gallery but there are also works of other commercial photographers including Washington based “Peiser” (Seattle) represented here. The album includes popular Maynard family images that appear in other Maynard family albums. File is a large family photograph album with a light brown leather cover and a metal clasp containing 121 photographic prints, the bulk of which are card-mounted studio portraits that document several generations of the Maynard family. Many of the photographs are attributed to photographer Hannah Maynard but there are also works of other commercial photographers including those identified as “H Thorn” (Bude Haven), “E.W. Burnham Photo” (Cannington, Ontario), “Bradley & Ruloeson” and “J. Hawke” (Plymouth). The album includes popular Maynard family images that appear in other Maynard family albums, including photographs of Hannah and Richard Maynard and their children (George, Albert Hatherly, Emma, Zela and Laura Lillian Maynard) and grandchildren (including John Ridgemen and Richard James Maynard) who are depicted in individual and group portraits. File is a large family photograph album with a yellow-green velour cover containing 69 card mounted photographic prints, the bulk of which are studio portraits that document numerous individuals and families, some of whom are members of the Maynard family. Many of the photographs are attributed to photographer Hannah Maynard of Mrs. R. Maynard’s Photographic Gallery, but there are also works of other commercial photographers and photographic studios including those identified as Washington based “Roberts & Kautz” and “Peiser’s Art Studio”/“Theo E. Peiser”(Seattle), as well as “A L. Jackson” (Tacoma). There are also works from photographers: “[Will] A. Peek” (Yaquina, Oregon), “Taber” (San Francisco) and photographic businesses “R. & H. O’Hara Photographers, BookSellers, Insurance Agents & c.,” (Bowmanville, Ontario). The album includes popular Maynard family images that appear in other Maynard family albums.