News item. Part 3 of a 7-part consecutive series on Victoria's Chinatown. Representatives from Chinatown explain some aspects of Chinese culture, both here and in China. A meeting of these men would probably be equivalent to our Chamber of Commerce or city council, except that all members are Chinese. This "council" has very firm roots and it is responsible for a smooth-running Chinese community.

News item. Part 7 of a 7-part consecutive series on Victoria's Chinatown. Footage shows some Chinatown buildings. These include the Yen-Wo Society, the Chinese hospital, the Chinese school, the Gee Tuck Tong Benevolent Association (1903), and the Hook Sin Tong charity. Good close-ups; no sound.

News item. This film opens with shots of the neon signs in Victoria's Chinatown. These are followed by archival photograghs which show the history of Chinatown -- the people, the stores, the buildings and the streets. Continues with shots of modern-day business activity in Chinatown. No sound.

News item. A Chinese-Canadian spokesman discusses the Benevolent Association, which is actually an off-shoot of a higher Masonic order. The club has existed in mainland China for a long time. The Victoria Branch was established in 1915. The shrine inside the building, made of precious and semi-precious materials, was carved in Canton and shipped from that city.

The item is a video copy of a feature film. ". . . dealt with a murderous gang of opium smugglers operating in Victoria's Chinatown and the efforts of the local police to track them down. Two men disappear -- Doverscourt, a detective investigating a murder in Chinatown, and Brandham, a ship's chandler involved in the drug trafficking who has offered to tell the police all he knows because things are going too far. Completely baffled by the disappearance, Police Commissioner Parkins reluctantly turns for assistance to Donegal Dawn, a Sherlock Holmes style private detective. Meanwhile Robert Rande, a young friend of Dawn, has been threatened by the Chinese after he has shown an interest in Zenobia, a pretty blonde girl working in a Chinese curio shop, and has discussed the matter with Dawn. The Chinese villains, who invariably wear hoods and long robes, are operating from a temple and Rande now goes to this temple where Zenobia is taking part in a religious ceremony, believing herself to be 'the Eye of Lao-Tsee', and attempts to rescue her. Just as Rande is about to be knifed Dawn appears and shoots the hooded attacker. Rande soon returns for another try, only to be attacked by the missing Brandham who is acting under the influence of drugs. Dawn appears yet again and saves his life but rescues only Brandham, leaving Rande behind. Brandham quickly recovers from the effects of the drug but can remember nothing and so a visit to a yogi is arranged -- to unlock the 'subjective' half of the poor fellow's mind. Brandham reveals another hideout further up the coast of Vancouver Island. Dawn rapidly penetrates this new stronghold, hoping now to extricate both Rande and Zenobia, but this time he is captured. Fortunately Victoria's finest are not far behind and arrive in the nick of time. When the leader's hood is removed he is revealed to be Chan Tow Ling, the owner of the curio shop and a secret police operative to boot. Chan Tow Ling takes poison and Rande gets Zenobia." (Colin Browne, citing D. John Turner) 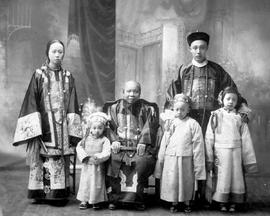 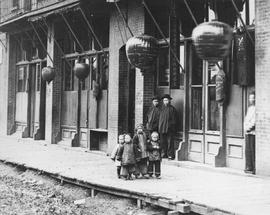 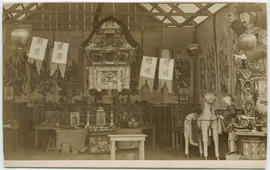 The item is a black and white cabinet card (with edges trimmed) showing a Chinese temple or Chinese community Tachiu event which may have been hosted by the Hongnen Chee Kung Tong (CKT). It may have been taken in Victoria. On the back of the card is the studio inscription of Mrs. R. Maynard's photographic studio with the address given as the corner of Douglas and Johnson Streets in Victoria. It is presumed to have been taken between 1872 and 1892 as that is when Maynard's studio was located at Douglas and Johnson Streets.