The first type of record includes land use planning records, falling under ORCS 52100, in particular those concerning official community plans, local property rezonings including applications to rezone, complaints against violations of zoning, proceedings of public hearings on zoning, building permits, building inspector correspondence and other records. The series also consists of records of the Secretary to the Board of Appeal for various areas, including the regulated areas of North Saanich, the Capital Region, Saanich, View Royal, Golden, including requests for rezoning, for building permits, and for certain types of land use.

The second type consists of bylaw advice and approvals, generally falling under the ORCs classification 51030. These records relate to approving municipal bylaws (except planning bylaws) that required the approval of the minister or inspector of municipalities, as well as providing related bylaw advice and support to municipalities.

The records include the files of the Inspector of Municipalities dating back as early as 1914, which include records concerning a broad range of records regarding the administration of local government, with subject matter including incorporation of localities in the province, changes in municipal status, including dissolution of incorporated bodies, amalgamation, boundaries and boundary extensions; legislation agreements and public investigations. Notably, the records include early files regarding the incorporation of many BC localities. These include plans, boundary descriptions, petitions and letters reflecting public opinion, local incorporation committee records including minutes, financial statements for local governments, and assessment rolls and taxation.

For tomorrow, a planning act

The item consists of a 2 inch video recording originally produced for presentation to the annual conference of the Union of British Columbia Municipalities in September 1980. It was later modified for television broadcast and shown on BCTV November 16, 1980. The video is of Municipal Affairs Minister Bill Vander Zalm discussing a proposed Land Use Planning Act for British Columbia. The legislation discussed was introduced into the Legislature as Bill 9 in December 1981, then revised and reintroduced as Bill 72 (The Land Use Act) in July 1982. Bill 72 died on the order paper.

Land use planning and management records

The series consists of records regarding the review and approval by the minister of bylaws concerning land use and planning, amendments to official community plans and their related amending bylaws and changes of zoning. These include case files for individual localities, in particular regional districts. The records were used for legal purposes, research and reference.

Planning bylaw review and approval involves planning bylaws that require ministerial approval (e.g., regional district, the Islands Trust, and the Resort Municipality of Whistler planning bylaws). Planning staff reviewed those bylaws in order to ensure that they did not conflict with provincial government interests.

The creator of the records used a coding system that assigned a code to each local government. For example, the regional district codes consisted of the two-digit alphabetic prefix “RD” for regional district followed by the alphanumeric coding system in use in the ministry responsible for municipal affairs at the time. In many cases the files would be labeled in such a way as to abbreviate the code. While the filing systems initially appear to be aimed at an alphabetical order, by locality, that order is often broken. Local government codes used in this record series can be found in Appendix D of the Administrative Records Classification System 1993 Edition. Some of the codes on files are extended with dashes or decimal numbers which represent subject categories.

Series consists of legal issue files created by the Ministry of Energy and Mines. The majority of the files document the creation or revision and administration of legislation and regulations,

The majority of the files consist of legal opinions, reports, background research, notes, draft documents, copies of existing legislation and regulations from BC and other jurisdictions, committee minutes, briefing notes to ministers and ministry staff, and cabinet submissions. The legal opinions provide advice for administering current legislation and creating new legislation. The research files include photocopies of records dating back to 1873.

The 19 CD-ROMS and DVD contain copies of research notes, most of which has been printed and placed in the files.

The records are arranged numerically by file number.

The records were classified as 140-03 (Legislation, Ministry or Agency – Legislative Program) in the BC Government’s Administrative Classification Schedule. 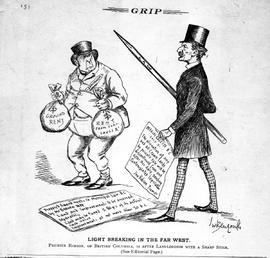 "Light breaking in the far west. Premier Robson, of British Columbia, is after Landlordism with a Sharp Stick"

The series consists of records documenting situations where municipalities establish or join corporations for the purpose of carrying out commercial activities such as community forests or purchasing shares in a company to build infrastructure, such as arenas. Local governments may enter into these arrangements because they want a separation of authority to shield local taxpayers from potential legal or financial risks. The records relate to commercial, industrial or business undertakings, including local government resolutions approving the incorporation of or purchase of shares in a company, the agreement between the local government and the company, and articles of incorporation. The Local Government Act (RSBC 1996, c. 323) provides that a local government may engage in commercial, industrial or business undertaking and incorporate a company or buy shares in a company already involved in the undertaking with the requirement that the local government receive approval from the Inspector of Municipalities. The records were created between 1974 and 1996 by the ministry responsible for municipal affairs.

The records are arranged by regional district name and regional district coding system or by topic. They consist of correspondence, minutes and agendas, reports, maps, bylaws, letters patent, news clippings, and contracts. They were initially regional district day to day operational files so were also assigned bylaw advice and approvals ORCS numbers (51030, 51040) from the Local Government Services ORCS, 2006. The function of these records changed when the program area started collecting and using them as regional and local government structure historical policy files. This artificial collection was eventually classified as policy and procedures files (55000-00), reflecting the final purpose of this record series.

The series consists of advisory and informational records developed by the provincial government for local governments to facilitate developing, adopting, and implementing regional growth strategies, which are strategic plans that commit participating municipalities and regional districts to a course of action to meet common social, economic, and environmental objectives, 1996-2006. The Local Government Act (RSBC 1998, c. 323) provides a framework for interactive planning between regional districts, municipalities, and the provincial government for creating these long-term land and resource management plans at the regional level. The plans often deal with rapid urban growth and its effect on matters such as air quality, affordable housing, transportation, drinking water, farmland, and wilderness, and natural areas. Some of the records in this series cover provincial government involvement in major projects such as large-scale transportation projects that may have significant environmental, economic, social, cultural, and health effects. The Local Government Department, part of the Ministry of Community Services and its predecessors, is responsible for this set of records.

This series is arranged by regional district or project name. The records include correspondence, memoranda, briefing notes, bylaws, minutes, agreements, and reports. The records are classified under growth strategy case files (55700-20) of the Local Government Services ORCS, 2006.