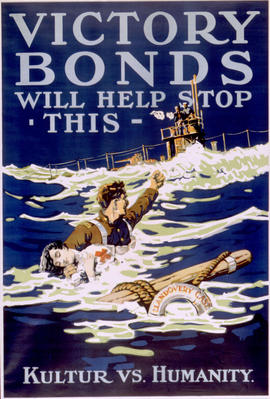 Victory bonds will help stop this: kultur vs. humanity

Item consists of one World War I fund-raising poster depicting a solider in roiling waters attempting to keep an unconscious (or deceased) nurse afloat. He is shaking his left fist at a semi-emerged submarine in the background. In the foreground is a ship’s mast and lifesaver with the name “Llandovery Castle.” “W.P.2” is printed in the bottom left.

The propaganda poster depicts the sinking of the Canadian hospital ship HMHS Llandovery Castle by a German submarine on June 27, 1918. The attack killed 234 people, including 94 Canadian medical officers and nurses, and left only 24 survivors. Red Cross markings denoting the Llandovery Castle as a hospital ship should have guaranteed its safe passage. Depictions of such an attack were useful in raising Canadian outrage and funds for the war effort. B.C.’s 72nd Battalion (Seaforth Highlanders of Canada) took part in Llandovery Castle operations.