Documentary. Slide/sound presentation about the oyster, its habitat, and harvesting and consumption of oysters.

The series contains records of the Dept. of Fisheries (1907-1957), the Commercial Fisheries Branch (1957-1973), and the Marine Resources Branch (1973-1979). These records relate to commercial fisheries, the regulation, development and conservatio... 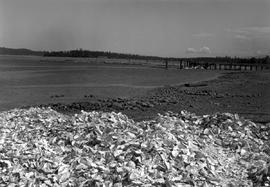 This series consists of records of the Department of Lands and Forests, Lands Service, primarily relating to leases of Crown land for various purposes. Records include cancelled or expired leases for oyster beds (including leases by the Government...

Footage. First half of film shows a crew working around a pile of oyster shells, and preparing them to be hung submerged from a raft for oyster propagation. The locale is probably one of the oyster harvesting areas on east coast of Vancouver Islan...