This series consists of correspondence, applications for homestead entry, application for patents, and registers relating to land settlement in the Railway Belt and the Peace River Block.

Canada. Department of the Interior

The fonds consists of A.D. Turnbull's files as an MLA and Minister of Health and Welfare as well as personal papers that reflect his association with various professional, national and community organizations. It also includes reminiscences b...

The collection consists of materials written by J.T. Walbran, including correspondence and research material. The collection also consists of a newspaper clipping book that Walbran kept between 1909 and 1912. Much of the material is related to Wal...

Inquiry into the Circumstances of Landslides at Whatshan

This series consists of records of the Inquiry into the Circumstances of Landslides at Whatshan, 1953-1954. Records include argument of counsel, transcripts of evidence presented at the proceedings (1953-1954), exhibits (1953-1954), and Commission...

British Columbia. Inquiry into the Circumstances of Landslides at Whatshan

Kaslo Board of Trade fonds

The fonds consists of a minute book of the Kaslo Board of Trade and certificates relating to the formation of the Board.

Kaslo Board of Trade

This series consists of multiple copies of transcripts of statements regarding the events of at CPR holdup and attempted robbery on 21 June 1909. There are three statements from different CPR employees recalling the details of the event which occu...

Records of the Superintendent of Police

This series consists of a variety of administrative and operational records from the office of the Superintendent of the BC Provincial Police Force, from 1903-1930.Most files consist of correspondence or reports and statistics submitted from polic...

The collection consists of oral history interviews pertaining to the Hudson's Hope area, including interviews about local Catholic missions.

This collection is comprised of records relating to the development, implementation and administration of game management policies in British Columbia, 1905-1922. It includes correspondence, reports, vouchers and licences, as well as information ...

The fonds consists of an indenture, leases, a journal, a ledger and an index to the ledger of the Cariboo Hydraulic Company.

Waddington Massacre : Minutes of the Evidence

This series consists of one volume titled “Waddington Massacre : Minutes of the Evidence” related to the Tsilhqot'in War, also historically referred to as the Chilcotin uprising and Bute Inlet massacre. The notebook is mostly blank but was us...

This series consists of waste management files for areas across the province from 1948-1981. The records were created by the Pollution Control Branch of the Ministry of Environment, and its predecessors. They document the management of waste outsi...

This series consists of appeal files and other records from the Environmental Appeal Board, 1981-1987. The series also includes some appeal or hearing files from its predecessors, the Pesticide Control Appeal Board and Pollution Control Board dati...

This series consists of administrative and operational records created by the Pesticide Control Appeal Board from 1978-1981. Appeals include objections to permits issued for the use of various pesticides across the province.Records include: minute...

This series consists of records related to the public hearing held by the Environmental Appeal Board into the effects of the Quinsam Coal Mine on the environment. The hearing was conducted pursuant to the Environmental Management Act (SBC 1981 c. ...

This series consists of a variety of administrative and operational records created by the Pollution Control Board from 1956-1981. Most records are related to specific appeals or objections to a permit. This includes those from individuals or grou...

The series consists of the case files of the Forest Practices Board with regard to its main function of acting as an independent watchdog to ensure compliance with sound forest and range practices. The case files involve the investigation of compl...

This series contains records of the Rayonier Canada Ltd. appeal relating to the Port Alice Pollution Control Permit number PE-1240. It includes a transcript of hearings held at Victoria, B.C., 26 June - 20 July 1973; proceedings of appeal before ... This series consists of statistical reports related to the production, operation, processing and disposition of oil, gas and water. The records were used by the Petroleum Resource Branch of the Ministry of Energy, Mines and Petroleum Resources fro...

The series consists of three scrapbooks of newspaper clippings compiled by the Provincial Mineralogist between 1894 and 1934. The volumes are indexed. 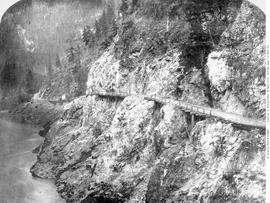 This series contains property tax assessment rolls for the Cowichan Assessment District, 1889 and 1890.

Fonds consists of photographic prints, negatives and textual material created or received by Jack B. Scott with predominant date range from 1923 to 1960.The photographs primarily depict logging and whaling, settlements, landscapes and wildlife of ...