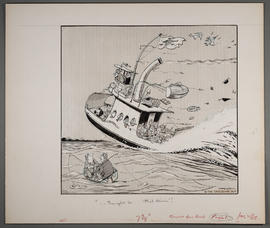 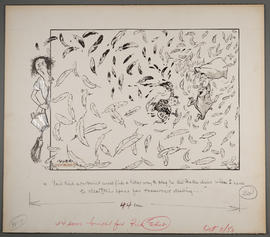 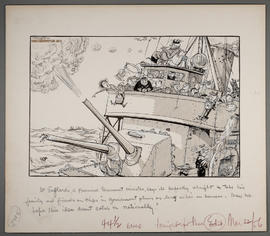 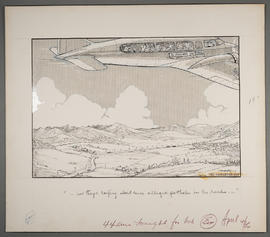 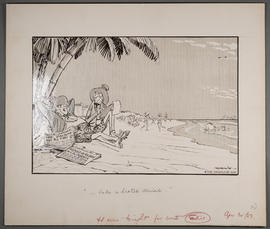 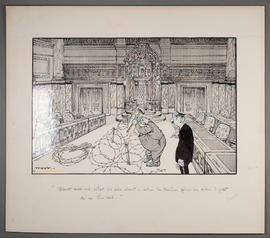 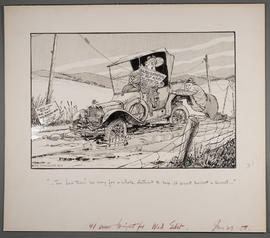 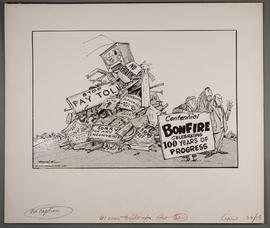 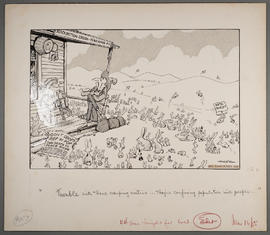 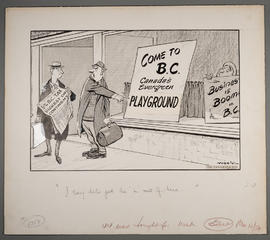 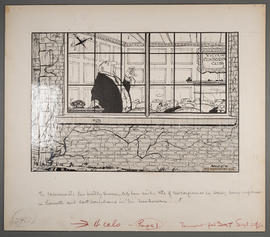 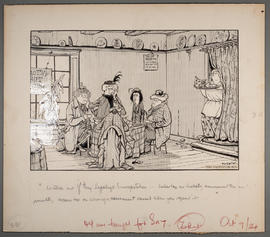 Leonard Matheson Norris was born December 1, 1913 in London, England and came to Canada in 1926, to Port Arthur, Ontario. He was employed as a draftsman in the offices of the Port Arthur City Engineers, and in the 1930s relocated to Toronto. After one year of night courses at the Ontario College of Art, he joined the Stanfield Advertising Agency as advertising artist and art director from 1938-1940. In 1940, he enrolled in the Canadian Army where he served as the editor, writer and illustrator for a magazine published by the Royal Canadian Electrical and Mechanical Engineers Corps.From 1945 to 1950, he worked as art director for Maclean-Hunter Publishing. In 1950 Norris moved to Vancouver and became editorial cartoonist for the Vancouver Sun newspaper. In 1951 he won the National Newspaper Award for caricature. He was elected to the Royal Canadian Academy of Arts in 1974, and to the News Hall of Fame in Toronto in 1979. His popularity was also reflected in the sales of annual books of reprints of his cartoons. Norris drew for the Vancouver Sun for 38 years, until he officially retired at the age of 75, in 1988. He died in 1997 at the age of 83.

The fonds consists of original drawings by Len Norris, created while he was employed as the political cartoonist for the Vancouver Sun newspaper. The first accession consists of 200 cartoons published in the Vancouver Sun between August 1953 and December 1988. The second accession consists of 270 rough sketches; some are undated, and the others date from May 1986 to December 1988. These sketches functioned as preliminary concept drawings for selection and editorial approval, and illustrate the artist's method of working. In some cases, these rough drawings became finished and published cartoons.

The cartoons document the career of Len Norris, and reflect political and social issues of the period. Subjects include recurring British Columbia social and political issues, and include figures from the B.C. political scene such as W.A.C. Bennett, Phil Gagliardi, Robert Strachan, Dave Barrett and Bill Vander Zalm.

Acquired from Len Norris through his agent (Pawluk, Johnstone, Voight), in two accessions.

The Len Norris drawings are available with digital images through the BC Archives website catalogue under "Norris, Leonard Matheson."

Ink, with applied toned laminate overlays, on art board.