The series consists of records created by the Atlin Gold Commissioner between 1898 and 1945. Records include correspondence inward and outward, mining and water records, and gold commissioner's court records. Camp of the Porcupine District Commission at the Klehini River 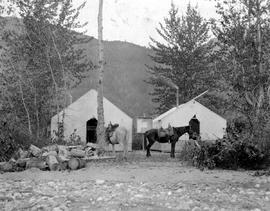 Camp of the Porcupine District Commission at the Klehini River

Maps and plans / drawn and collected by A.S. Farwell This series contains a record book relating to mineral claims (1 volume). This register was maintained by the Mining Recorder, but contains grants and records approved by the Gold Commissioner, Nelson, B.C. Included are a record of affidavits of ...

The series contains records relating to mining leases (3 vols.). Volumes 1 and 2 are entitled Records of Mining, Leases and are registers of leases issued. They are arranged by Mining District. Included are entries for lease number, date and des...

Shows line of proposed flume and placer claims on Lowhee Creek near Jack of Clubs Lake. Accompanied an undated petition to Governor Douglas requesting a charter for building a flume on Lowhee Creek.

This series consists of records of the 1988 Strathcona Park Advisory Committee (SPAC) under the Ministry of Environment and parks. The committee collected public input regarding the future uses and management of Strathcona Park. The majority of re...