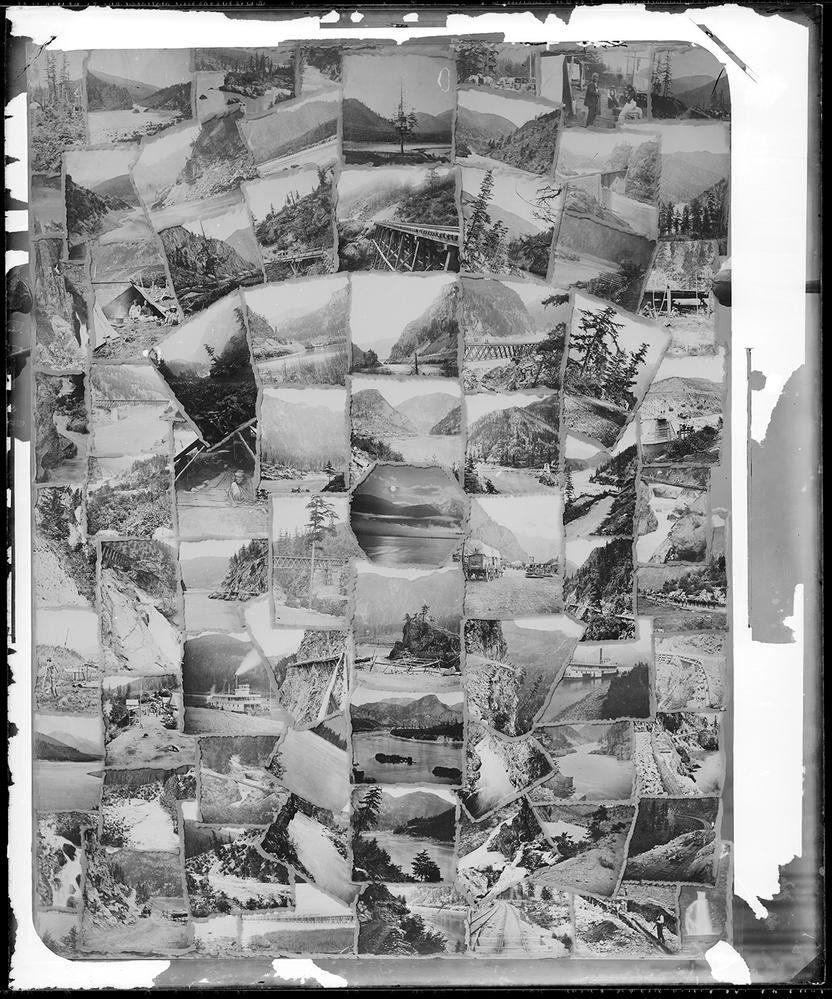 The image depicts a photograph of a multi-image montage photographic work, part of a number of montages created in the 1880s and 1890s. It is a gelatin dry glass plate negative (10 x 12 inches). The work is composed of many photographs physically puttied together to form a single work. Some of the photographic works included are attributed to Richard Maynard and relate to his field photographs likely produced during his documentation of the Canadian Pacific Railway construction in British Columbia and Alberta in the 1880s. There may also be other photographic works attributed to Richard or Hannah Maynard that relate to their work produced during other photographic work trips including documentation of the Cariboo Road in the 1860s by Richard Maynard. Evidence illustrating the location where this work was photographed is not visible. This negative has been manipulated. The emulsion located on the edges of the photograph have been scratched off or otherwise removed, removing some the visual information in that region. Two tongs are visible, holding the work up to be photographed, at either side of the image.

The negative is missing a small section at the corner of the glass plate. There appears to be no loss of the visual information on the plate in that region.

Additional private record collections contain a number of original prints (including card mounted originals), see MS-2964 Photographs and sketches in PR-0356 Newcombe Family fonds (box 15, file 505). Here there are two card mounted prints of a montage works similar to this work that present field photographs in a quilt like pattern. Both prints have the imprint on the front "R. Maynard - Artist" and "R. Maynard Photographic Artist And Dealer in All Kinds of Photographic Materials - Stereoscopic and Large Views of British Columbia and Vancouver Island for Sale. - Cor. Douglas & Johnson Streets, Victoria, B.C." Both prints also include a stamp of the front and verso of a coin with the following text "...Edward Prince of Wales Execut.." (front) and "Colonial and Indian Exhibition London 1886" (verso).
Other records in the Maynard family collection (PR-1259) hold related works relative to J-04572. For prints, such as those included in Maynard photographic albums, see MS-2951 described as My Automobile Trips. Lillian E Maynard. This album contains a cropped version of photograph J-04572 as a unmounted print with the title “Some of the Many Scenes of British Columbia by R. Maynard.” The photo album described as MS-3328 - Photographic View Album by R. Maynard, Artist, includes prints of some of the field photographs and landscape works contained in J-04572, including alternative views of “Lady Franklin Rock, Fraser River, B.C.” and other works likely produced during photographic tours the Maynards conducted to document the construction of the transcontinental railway, including the Canadian Pacific Railway (C.P.R) during the 1880s.

Archives code(s): HP017979 (this catalogue number has been applied to both the negative and the print).