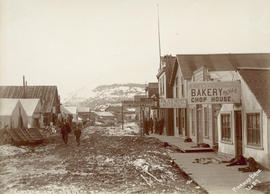 The Muirhead brothers, Charles H. and Lewis Potter, were born in Scotland in the 1870’s. By 1893 they had arrived in North America. They took up photography and established their partnership, called Muirhead Bros., in 1896 in Sidney BC.

They followed the Klondike gold rush to Whitehorse, Yukon and Atlin and Bennett in Northern British Columbia sometime around 1899. Between that time and 1903 they took photographs of mining activities in the area and also documented the non-mining people and activities.

The albums were donated by Frances Graves of Washington in 1982.