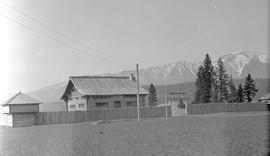 A replica of Fort Thompson on the site of the original Fort Thompson; built by His Honour Lieutenant Governor Bruce as a memorial to the famous explorer, David Thompson

This series includes an accession register for artifacts and archival materials donated to the BCFS Museum. Entries are cross-referenced to the catalogue of the Project 87 artifact collection.

BC Provincial Museum correspondence inward and other material Clinton. Parade before the opening of South Cariboo Museum 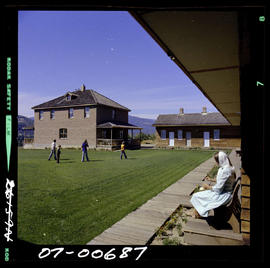 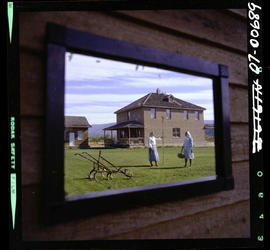 This series consists of the personal files of the Deputy Provincial Secretary, Paschal de Noe Walker, 1930-1946. Records deal with health and welfare facilities (hospitals, industrial schools, etc.), social services, elections, libraries, museums and a variety of other programmes and services administered by the Provincial Secretary's department. 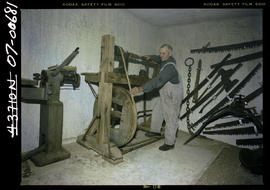 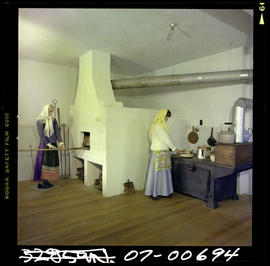 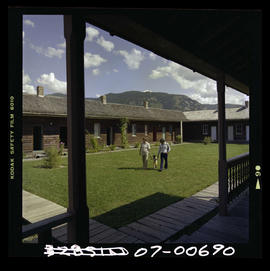 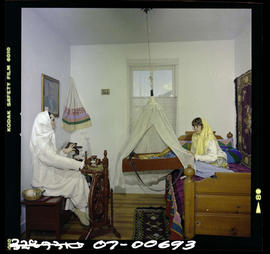 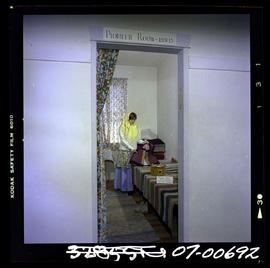 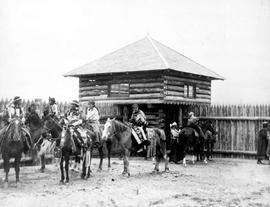 Fort Point, Invermere on Lake Windermere; pageant for the David Thompson Memorial celebrations; the outpost of the fort showing the Kootenay Indians 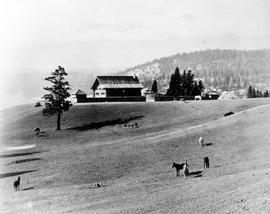 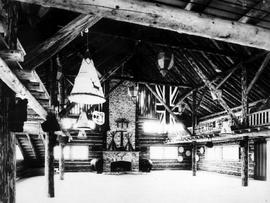 Papers relating to forestry, the Forest Service, Boulton's antiquarian interest and his private museum collection. Includes reports done for the School of Forestry of the University of New Brunswick (1943), a report on forest protection (1962), minutes of the 1969 meeting of the Association of BC Foresters, a poem on the BC Forest Service entitled "Progress...", records of timber sales, a 1931 memorandum of the Chief Forester on the issuance of pencils, and a book in Chinese. 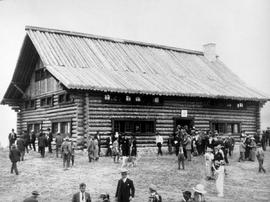 Pageant for the David Thompson Memorial celebrations; fort rebuilt and reopened for the occasion

Records of the Minister of Small Business, Tourism and Culture

The series consists of correspondence, reports, meeting minutes, briefing notes, business plans, newsletters and marketing plans created by the Minister of Small Business, Tourism, and Culture. The series consists of records created by both Darlene Mazari and her successor Bill Barlee. Mazari served as the Minister of Tourism and Minister Responsible for Culture between 1991 and 1993, and Barlee served as the Minister of Small Business, Tourism, and Culture from 1993 to 1996. The records document the government’s involvement with libraries, publishers, historic sites, and museums province-wide. The series demonstrates the involvement of the provincial government in marketing British Columbia as a tourist destination to BC residents, Canadians, and foreign visitors. The series also provides evidence of the relationship between British Columbia’s First Nations and the provincial government. The series includes several industry- or sector-specific reports, including strategies for golf and ski resorts, and rail travel. The series consists of records relating to the development of Hastings Park, the site of the PNE, Barkerville, Fort Steele, and the Kettle Valley Railway. The records also provide evidence of how BC’s decisions to develop areas such as Clayquot Sound affected tourism and outsiders’ perceptions of the province.

Records in accession 92-4526 date from 1989 but appear to be have been used by Mazari and placed in the file in the 1990s.
The series is arranged by subject.

The fonds consists of the records of the Watt family from ca. 1910 to 2009 and documents the family activities in Ontario, British Columbia and England. There are seven series in the fonds as follows:

George and Mary Watt files: These files consist of records created by George and Mary Watt while living in Wellington, Ontario and West Vancouver, British Columbia. They include family correspondence (including some audio letters), family photographs, pocket and travel diaries, Christmas card lists, scrapbooks and clippings from ca. 1910 to 2004.

Alison Logan files: These files consist of records created by Alison Logan (later Watt) during her childhood and young adulthood in London, England and her first years in Vancouver, BC. They include diaries, correspondence with friends and family (including an audio letter), school and university papers and certificates, programs, cards, photographs and travel diaries from 1952 to 1973.

Robert Watt files: These files consist of records created by Robert Watt during his childhood in Ontario and West Vancouver and young adulthood in West Vancouver and Ottawa. They include a baby book, notes and clippings, school and university papers and certificates, correspondence with family and friends, cards, photographs and diaries from 1945 to 1973.

Robert and Alison Watt files: These files consist of records created by Robert and Alison Watt during their married life in Vancouver, BC and Ottawa, Ontario. They include diaries, correspondence with family and friends, household papers and correspondence, wedding and travel files, cards, financial files, employment files, photographs, family heraldry information and files and West Vancouver High School reunion files. These files span the years 1971 to 2009. They also include family history files created by Robert during the research and writing of family history.

General heraldry files: These files consist of records created by Robert Watt during his life in Vancouver to manage Vancouver based heraldry projects and Heraldry Society of Canada activities. They include correspondence, publications, bibliographies, subject files, project files, certificates, photographs, video and audio recordings, artwork and convention files from 1971 to 1993.

Canadian Heraldic Authority files: These files consist of records created by Robert Watt in his capacity as Chief Herald of Canada from 1988 to 2007, based in Ottawa, Ontario. The files include correspondence, subject files, coats of arms and letters patent for individuals and institutions, travel and conference files, appointment books, photographs, video and audio recordings, framed certificates and other framed works from 1986 to 2008.