The series consists of four reels of amateur film footage taken between 1937 and 1944. They show scenes and people in Slocan City and vicinity, on the Clough Ranch, in the Slocan Valley and at Halcyon Hot Springs. They depict Clough and Cooper f...

Personal correspondence; letters to editors; essays, articles and lectures; poems and songs, most of which reflect Harris' socialist viewpoint.For ease of retrieval, since some essays duplicate letters to editors, only those items which are s...

Travelogue. From Osoyoos to Trail and Nelson by the Southern Trans-Provincial Highway. Footage includes: Cominco smelter; the sternwheeler "Minto" on the Arrow Lakes and at Castlegar; Kootenay River power station; lumbering scenes; car ... 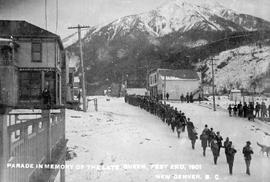 Parade in the memory of the late Queen

Personal correspondence consisting mainly of letters to his children and grandchildren, 1943-1949, and some letters to the editor; reminiscences of life in British Columbia's Cowichan (Vancouver Island) and Kootenay districts. Children gathered on outside of chain link fence.