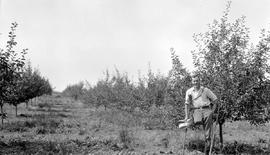 Reminiscences concerning Bodington's boyhood in England, voyage to New York, and travels in Montana and Oregon (1884-1887). Reminiscences of Vancouver and of Bodington's career as farmer on Sea Island, in New Westminster, and in Vernon ...

Minutes of evidence given at hearings held at Vernon, 12 August 1919, and Victoria, 7 January 1920, by the commission of inquiry to inspect the water systems of the White Valley Irrigation and Power Company and Coldstream Estates, pursuant to sect...

Commission to Enquire Into the Economic Conditions in the Several Areas under Irrigation Projects, 1927

British Columbia. Commission to Enquire Into the Economic Conditions in the Several Areas under Irrigation Projects, 1927

Correspondence files relating to water licences and irrigation in the vicinities of Rock Creek and Greenwood, and the southern Okanagan valley.