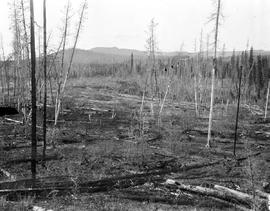 Records relate to the Soldiers' Homestead Act, the Soldiers' Land Act, and the B.C. Returned Soldiers' Aid Commission. Types of records include correspondence, reports and memoranda; includes a proposal for soldier settlement in St...

Correspondence outward from the District Forester 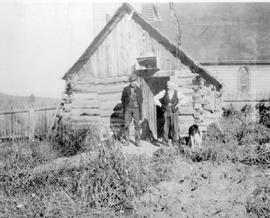 James May and Ezra Evans

Standing in front of log cabin. Church in background.

This series contains records relating to land use management in various parts of the province. The records document the creation and activities of various committees established by the planning region to address specific projects as needed.The rec...

Correspondence with the Dept. of Lands and Works regarding applications to pre-empt land on the Skeena River, 1870-1871. Also on the microfilm is a February 1896 letter to Ezra Evan at Manson Creek appointing him to the position of Mining Record...

This series consists of a list of sawmills, planer mills and barker-chippers organized by Ranger District until 1979 and by Forest District thereafter, compiled by the District forester/Regional Manager. Contains information as to name of mill or...

Historical sketches of Mennonite colony, near Vanderhoof, British Columbia (1918-1921), along with capsule biographies and xerox photographs of early settlers. Prepared by the author for the Nechako Valley Historical Society, 1980.Presented by th...