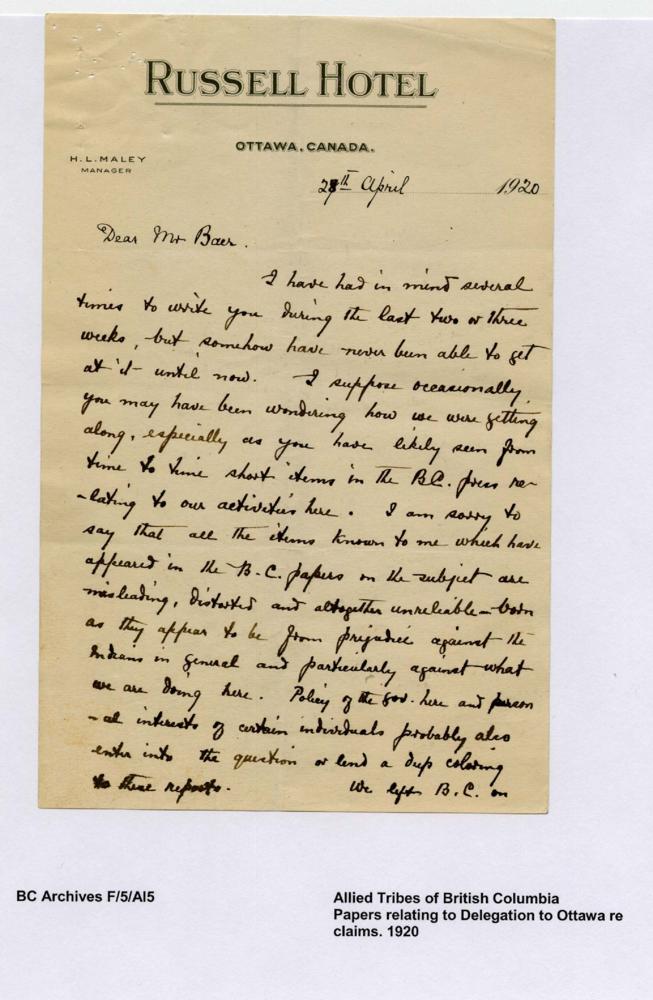 Papers relating to Delegation to Ottawa re claims

The Allied Indian Tribes of British Columbia formed in June 1916 at a conference held in Vancouver, which consisted of the Nisga'a Tribe, Interior Tribes, and the Indian Rights Association. Prior to this conference, in February 1915, a meeting was held at Spences Bridge at which point the Interior Tribes of British Columbia became allied with the Nisga'a Tribe in support of the Nisga'a Land's Committee's 1913 Petition to His Majesty's Privy Council. At the 1916 Vancouver conference, the Indian Rights Association also committed to co-operation with the Nisga'a and Interior Tribes and there was consensus to reject the Federal Government's terms presented in a 1914 Order-in-Council (P.C. 0751-1914).

A provisional committee was formed in 1916 in Vancouver, and the first general meeting of the Allied Tribes was held at Vancouver and Spences Bridige in June 1919, at which point a permanent executive committee was formed. Arthur O'Meara served as general counsel for the Allied Tribes, and had previously acted as counsel for the Nisga'a (including during the 1913 Petition).

The file consists of documentation prepared by the Delegation of Allied Indian Tribes of British Columbia (also referred to as Allied Tribes of British Columbia) and presented to various Government of Canada bodies and individuals, including acting Prime Minister Foster, the Special Committee of the House of Commons considering Bill 14, the Senate Committee, as well as the press. The Delegation representing the Allied Indian Tribes of British Columbia in Ottawa was comprised of Peter Calder of the Nisga'a [Nishga] Tribe, George Matheson of the Tsimshian [Tsimpshean] Tribe, Peter R. Kelly of the Haida Tribe, and Chief Basil David of the Shuswap Tribe, and accompanied by Special Agent J.A. Teit.

The contents of the file provide a response to Bills 13 and 14 (proposed amendments to the Indian Act), and deal largely with land and settlement issues following the McKenna-McBride Royal Commission on Indian Affairs for the Province of British Columbia, 1913-1916 (Bill 13), and enfranchisement (Bill 14). Documents in the file also provide a brief history of the formation of the Allied Indian Tribes of British Columbia.

The file consists primarily of carbon copies of submitted correspondence, however there are also some handwritten notes and 109 cards which include an individual's name and their role (typically either chief of delegate of a tribe).