Across Canada in fifteen minutes

At home : the Premier on his farm ; The funeral of Dr. Tolmie

Belleville Street in front of the the legislative buildings; the Big Snow, Victoria

Documentary. "Oliver Evans, President of the B.C. Jersey Breeder's Association and A. J. Cameron, Secretary. 'A Trip through Saanich (The Fair Land), The Home of the Jersey - May 26th'. A file of automobiles travelling along t...

Travelogue. "An animated curtain rises to reveal waves washing in on a sandy beach. [Long shot of] Hatley Park castle from pond at bottom the garden, a rowboat passing by. "Princess Kathleen", CPR ferry, arrives in Victoria's I...

Travelogue. "'Sunshine and flowers - thus it is that one thinks of Victoria, the capital of British Columbia. Its enterprising business district is only overshadowed by its beautiful gardens. Such places of interest as Beacon Hill Park, ...

Correspondence relating to compensation for privately owned lots on Bird Cage Walk required for the Parliament Buildings. From Lands and Work files 4155/1892, 4457/1892 and 41/1893.

Correspondence relating to safes and locks at the Parliament Buildings

Miscellaneous correspondence relating to safes and locks at the Parliament Buildings. Includes a letter to F.M. Rattenbury from M.W. Waitt re vault door combinations.

Series consists of photographs acquired by George Giles as Deputy Minister of Highways and Public Works and its predecessor body, the Department of Public Works, from 1973 to 1979. There are photographs taken of the legislative precinct area in 1...

For all we have and are

Amateur film. A propaganda film, made in the early days of the Second World War. Opening with footage of a giant Empire Youth Rally at Brockton Point Oval, the film illustrates Canadian democratic values, institutions and ideals which are now thre...

Guard of honour from 16th Canadian Scottish inspected by His Excellency Viscount Willingdon during his visit to Victoria, B.C.

Newsreel item. Band and soldiers marching in Scottish costume. Governor-General Willingdon inspects the guard of honour. A title reads: "These young volunteer soldiers are a credit to the country." The inspection takes place on Bellev...

Guestbook from the open house at the Parliament buildings, November 5, 1991

The record consists a bound volume guestbook created for the open house at the Parliament buildings in Victoria, BC to mark the swearing-in of Premier Mike Harcourt and the executive council on November 5, 1991. Visitors to the event signed the g...

RECORDED: [location unknown], 1971 SUMMARY: Crowd noise, interviews and speeches at a jobless demonstration at the opening of the BC Legislature in 1971.;

North of the border 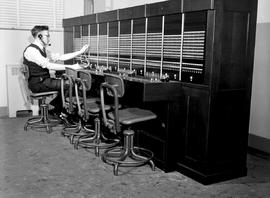 Opening of the Fourth Session of the 7th Parliament; first session in the new Parliament Buildings

Report and commission of Commissioner Angus John McColl; transcripts of evidence and exhibits.

British Columbia. Commission on Contracts With Frederick Adams and Richard Drake for Work on the Parliament Buildings, 1898