Documentary. The building of a BC Rail 129 kilometre (80 mile) branch line to the coal mines of Tumbler Ridge for the Northeast Coal Project. Shows surveying; tunnel and bridge construction; laying of rails; manufacture of porcelain insulators; in...

The item consists of a release print of an industrial film, made between 1963 and 1967. It shows the planning, construction and official opening of the W.A.C. Bennett Dam at Portage Mountain on the Peace River. Includes discussion of the geology ...

RECORDED: [location unknown], 1979-07-25 SUMMARY: Mr. Bruce tells of his education in Victoria. The difficulties of getting a school in those days; getting school at Upper Pine (1938-39); took train there, with 40 teachers going north. Describes c...

Item consists of a industrial video about the Forest Service's involvement in clearing the Peace District for flooding.

Series consists of two letters to Richard Wolfenden and one to Madge (Wolfenden) Hamilton, 1904, 1908, 1958, containing reminiscences of early British Columbia by Francis Brook Gregory and John Connell and reminiscences of the family of R.C. Moody...

Letters and newspaper clippings re E. Muriel Claxton, nurse at the Red Cross Outpost Hospital at Cecil Lake, Peace River Block. The collection consists of two letters from Miss Claxton to Mrs. Gordon thanking her for gifts of clothing and money; ...

Correspondence outward from the District Forester

This series contains the correspondence inward to the Minister of Mines: includes 1898 report from Gold Commissioner, Telegraph Creek; correspondence with George M. Dawson, Geological Survey of Canada, 1899; a 1900 report on the collection of mine...

Part of Industrial and economic development films and videotapes

The item consists of a promotional film. It explores the development of northeastern BC natural and metallurgical resources. Topics discussed include: future coal agreement with Japan; Prince George; Dawson Creek; new industrial development on the...

Series consists of correspondence, 1904, and diaries April - June 1904, winter 1905-1906, and August 14 - October 10, 1907 concerning trapping and prospecting, Tumtum Creek, Shuswap district and of a reconnaissance survey made for lumber company f...

Energy from the Peace : Site C

The item is a composite print of a documentary film from the 1970s. It is a description of the proposed Site C project on the Peace River, seven kilometers southwest of Fort St. John. The film shows how the waters of the Peace can be harnessed a ...

Energy from the Peace : Site C

The item is a release print of a documentary film, from the 1970s. It contains a description of the proposed Site C project on the Peace River, seven kilometers southwest of Fort St. John. The film shows how the waters of the Peace can be harnes...

Footage. Aerial footage of various forest fires between Squamish and Whistler, in the Cariboo Region, the Peace River Region, Bulkley Valley, Vancouver Island, and along the BC/Alberta border. Commentary discusses characteristics of the individual...

Documentary. The importance of roads to a timber management program; the plotting and construction of road networks for forestry projects in the Gold River and Peace River pondage areas. The historical method of log transportation by waterway is ...

The fonds consists of account books of Fort Dunvegan. 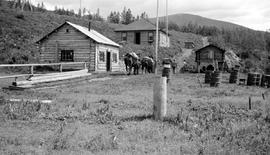 Same view as I-57969 with group of 4 men in foreground and others in background.