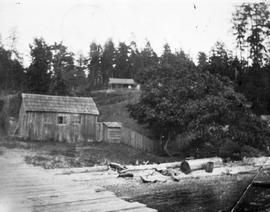 Cecil Claxton was born in Hampstead, England in 1886. He joined the Merchant Marine and the Royal Naval Reserve, and both before and after the First World War, served in the Canadian Pacific's Trans-Pacific fleet, attaining the rank of Staff Captain. In 1936 he became Superintendent of Pilots, British Columbia Pilotage district, and held that position until his retirement in 1953. While Captain Claxton was in the Pilot Service, the Claxtons lived in West Vancouver and Vancouver. After his retirement, he and Mrs. Claxton moved to Pender Island. In 1927, Cecil Claxton married Helen Violet MacGregor who was born in Kuling, China in 1898. Her father, Roderick MacGregor was with the Imperial Maritime Customs. Her mother, Annie Say, went to China in 1886 after receiving nursing and social service training in England. The MacGregors had four daughters; Mrs. A.L. Buckley (Nan), widowed during the First World War, who lived in England; Mrs. H.A. Cornaby (Jay or Jessie) also widowed during the First World War, who returned to China from England, was interned there during the Second World War, and then moved to British Columbia; Flora, who taught at the Shanghai Municipal Council Public School for Girls and also moved to British Columbia after the Second World War, and Helen. Peter, the Claxton's son, was born in 1929, and as a very young child lost his sight. He was educated at the West Vancouver Nursery School, operated by his mother, St. George's School (Vancouver), the National Institute for the Blind School of Physiotherapy, in London, England, and the University of British Columbia, from which he received a B.SC. in Agriculture in 1962. The collection contains two major series from Captain Claxton to his wife; letters, 1924-1932, written from various Canadian Pacific ships, mainly the Empress of Asia, largely domestic and personal, but containing references to incidents on voyages and at ports of call; and letters 1942-1943, written while Mrs. Claxton and Peter were living near Vernon for Peter's health which may contain some references to the Pilot service but seem to be almost entirely domestic. A third series of letters from Captain Claxton concerns arrangements to send Peter to the National Institute for the Blind School of Physiotherapy and consists of letters, 1946-1952, to the school and to his relatives in England. The letters from Mrs. Claxton to Captain Claxton, 1942-1943, are written from the Okanagan, mainly Vernon. They are largely concerned with domestic matters and Peter's development, but are also full of descriptions of their friends and activities in the Okanagan. Peter Claxton's letters consist mainly of ones written to his parents from England, 1949-1954, and from the University of British Columbia, 1958-1962. Amongst other correspondence and manuscripts written by him, the collection contains a long account of a trip made with a friend to the Cariboo ca. 1961. Letters from Mrs. MacGregor and from Flora, written from China, while they are mainly personal, form an interesting example of the life led by one segment of the British in China in the late 1920s and 1930s.

Fortunate islands : impressions of early days on the Gulf Islands

The item is an hour-long sound program produced for the Provincial Archives' Sound Heritage Series under contract, about pioneer days on the Gulf Islands. It includes the impressions and stories of early residents of Galiano, Saturna, North and Sound Pender, and Mayne Islands, emphasizing the arrival of new settlers, lighthouse life, and the joys and tribulations of island life.

RECORDED: [location unknown], 1966-01-31 SUMMARY: TRACK 1: Mr. G. Stanley Harris describes circumstances of his birth in Ontario; came to BC in 1900; went to Atlin District in 1900; worked in the gold mines in the Atlin District; traveled to Dawson ;City in the Yukon; took a boat trip down the Yukon River; describes Dawson City and Bennett and the Atlin District as he remembers them at the turn of the century; the Reverend John Pringle is described; a description of Whitehorse. TRACK 2: Mr. Harris describes gambling incidents concerning his friend Harold Stone; adventures in the goldfields; moving to Pender Island in 1902; Pender Island pioneers and pioneers on Mayne Island.

Cowichan Land District, Vancouver Island, land register, Sections 1- 24, superceded 1929 (i.e. no further entries were made after 1929). The register lists the sections in numerical order, and records the alienation of land from the Crown (by purchase, pre-emption, lease, etc.): information may include the name of the purchaser, dates and numbers of certificates issued (including Crown Grants), dates and amounts of payments, and reference numbers to correspondence files and field books. The volume contains an alphabetical index.

Cowichan Land District, Vancouver Island, land register, arranged numerically by lots within local areas, i.e. individual islands, superceded 1929 (i.e. no further entries were made after 1929. This volume is a continuation of an unknown previous register and records the alienation of land from the Crown (by purchase, pre-emption, lease etc.): information may include the name of the purchaser, dates and numbers of certificates issued (including Crown Grants), dates and amounts of payments, and reference numbers to correspondence files and field books. The volume contains an alphabetical name index.

RECORDED: [location unknown], 1965-10-04 SUMMARY: TRACK 1: Mr. Neptune "Nep" Grimmer recalls his life on Pender Island. His father, Washington Grimmer, was born in London, England, grew up in Australia, and came to BC in 1877. He then worked in the Cariboo with sheep before settling on Pender in 1882 and marrying Elizabeth Auchterlonie in 1885. Neptune Grimmer describes some of the early island settlers, including David Hope, Mr. Buckley, the Hope family, the Auchterlonie family, and the Davison family. He describes the type of small boats used for transportation; fishing and farming on the island; and his parents operation of a guest house; from 1910 to 1920. Neptune Grimmer was born in a boat while crossing Navy Channel; his older sister was the first white child born on Pender. He recalls childhood activities; schooling and the family; farm. In 1908 he attended the Agricultural College at Guelph; the family exhibited at the local agricultural fairs and supplied cream to the Salt Spring Creamery. He describes the evolution of farming on the island from sheep to dairy and later beef cattle. There is discussion of the early fruit farming and land settlement on the island. [TRACK 2: blank.] 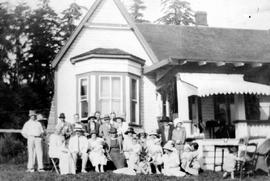 SUMMARY: North Pender Island was settled by a number of interesting families. Here a few of the descendants recall what life was like when Port Washington, Hope Bay and Browning Harbour had their first inhabitants. Voices heard are: Mary Hamilton, Beatrice Freeman, Margaret Smith, Will Dawson, Victoria Menzies, Stanley Harris, Robert Roe and Neptune Grimmer.

The series consists of slides showing Pender Island and the activities of the Yellow Point Drama Group. The latter include slides depicting the groups's various stage productions; their club house at Cedar; and a trip to Kelowna (1968?) to take part in the B.C. drama finals.

The item is a documentary film release print of a portrait of life on Pender Island, 1965. Shows the island's school; ferry service; crowning of the May Queen; church (and confirmation service); golf course; store; etc.

This series consists of a record of registered letters received for delivery at, mailed at, or passing as "Forward" through the Pender Island Post Office.

RECORDED: [location unknown], 1965-10-04 SUMMARY: TRACK 1: Mr. Robert "Bertie" Roe reminisces about Pender Island. He describes his father, who came from Scotland as a marine engineer, and settled on Pender Island in 1896. He describes Port Washington; the Hope Bay rivalry; clearing land and building up a farm; in 1918 he started a resort; a visit of Premier McBride and a Conservative party picnic; a political speech; sea serpents; the Shingle; Bay fish plant; rum running; Cannonball Baker. [TRACK 2: blank.]

The item is a video copy of amateur films made by John L. Getgood, mainly under the company name "Unit-One Productions".