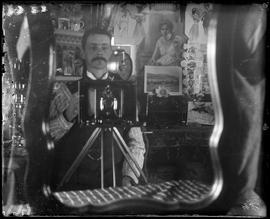 A photographer's self portrait

The series consists of photograph albums and loose photographs created primarily by Frederick Dally. File MS-3100.11, Accession 198611-001, also contains photographs by Richard Maynard and possibly Oregon Hastings. All prints, whether loose or i...

Correspondence between the Provincial Librarian and Mr. G. A. Bulhak concerning an exhibition of his photographs at the library.

A biography and documents relating to George Robinson, the first mine manager at the Hudson's Bay Company coal and brick works at Nanaimo. The collection includes a lock of his first wife's hair. George Robinson also owned a photograph...

SUMMARY: An educational kit (comprising a filmstrip, audio cassette, and booklet) telling the story of Mattie Gunterman, who settled in the Beaton, B.C. in 1896 with her husband Bill and son Henry. The kit recounts Mattie's experiences as a p...

Newsreel item. "TOURISTS ARRIVE FROM THE USA: Two CPR ferries move toward dock laden with American visitors to Victoria. Shots of passengers disembarking and drivers waiting for them. One shot, through porthole, of two ships. Cameraman wi...