Certificates of appointment and certificates of dismissal for police constables and peace officers under the National Harbours Board Act and the Canada Ports Corporation Act registered at the Vancouver Law Courts. The certificates (many of which ...

This series consists of records of the Lillooet Provincial Police Force. Records include a charge book, signed by J.R. Flynn, constable (5 p.); alphabetical lists of certificates of work, with fees paid, 1896-1898 (0.5 cm); and spirit licences, 18...

SUMMARY: SIDE 1: Jack Webster reports on the Vancouver police controversy following the attempted suicide of Constable Len Cuthbert. [SIDE 2: blank.];

CALL NUMBER: T1028:0001 RECORDED: [location unknown], 1961-07-08 SUMMARY: TRACK 1: Mr. Cliff Harrison describes how he came to Ootsa Lake, and the good reputation of the land for agriculture. He discusses his father, who was a miner in the Kooten...

The series consists of correspondence, draft agreements, and a report prepared for the 1964 Conference of Federal and Provincial Officials re: Royal Canadian Mounted Police provincial agreements.

Correspondence relating to the Royal Visit, 1939

The series consists of correspondence relating to the Royal Visit of King George VI and Queen Elizabeth to British Columbia in 1939.

The series consists of a letterbook containing crime reports produced or collected by Sergeant John William Hooker during the course of his duties as a British Columbia Provincial Police (BCPP) officer while posted to Coquitlam, Grand Forks, Nelso...

This series consists of four page report forms completed each month by BC Provincial Police Force constables at police stations throughout the province. The form provides a space for describing each day's activities and also lists personal a...

Indexes to letters inward to the Superintendent of Police

This series consists of indexes to letters inward to the Superintendent of Police, 1912-1922. Volume 1 is arranged alphabetically by subject, volume 2 by place name.

This series consists of correspondence outward of BC Provincial Police Inspector T.G. Wynn from 10 January - 12 April 1913. Joe Netsena at his induction into the R.C.M.P. at Fort Nelson 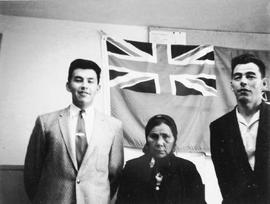 Joe Netsena at his induction into the RCMP at Fort Nelson Joe Netsina at his induction into the RCMP at Fort Nelson

This series consists of ten volumes of Provincial Police Force monthly crime analysis and statement of fines, 1923-1926 and 1930-1935. Volume 1 is arranged by division, then district. All other volumes are arranged alphabetically by district or mu...