The item consists of a reel of 16 mm film which includes the following items:
A. An interview with Dr. Greenshields [?], director of the federal Agriculture research station at Saskatoon. (00:05:30)
B. At the Saanichton quarantine station, a researcher explains the Department of Agriculture's plant protection policy, which prevents the spread of plant diseases which may be brought in with imported plants. (00:05:30)
C. Dr. Lawrence Burr of Princeton, B.C., talks about methods of halting the blowing dust from old mine tailings that is polluting the town. The old mining town of Copper Mountain. (00:09:00)

CALL NUMBER: T0675:0001 RECORDED: [location unknown], 1964 SUMMARY: TRACK 1: Mrs. Angela McDairmid was born in Princeton before it was known as Princeton; she discusses her earliest memories; where the house was; several anecdotes about her mother and her youth; her father; floods; her family history; her father's arrival in Victoria in 1858; the gold rush on the Fraser River; the pack trains; the area around Princeton as she remembers it; more stories. Susan Louise Moir was her mother, and she discusses her life; her parents' early married life; the first settlers in Princeton; gold mining in Granite Creek; John Chance and other prospectors; how Princeton got its name. TRACK 2: Mrs. McDairmid continues by describing the first mines in the area; the Hope Trail; some characters; Chinese workers who worked for her father; stories; some characters whom she remembers.

CALL NUMBER: T0675:0002 RECORDED: [location unknown], 1964 SUMMARY: TRACK 1: Mrs. McDairmid continues with stories about the land around Princeton, some bodies that were found, building a bridge, a shooting among Indians, the Allison town site, Judge Haynes, Indian boat races at the river, potlatches, a shooting, the killing of a Nicola Indian, Merritt as a coal mining town, Dr. Tuttle's hanging, superstition among the Indians. Finally, she discusses her father giving the copyright to his stories to her sister. [TRACK 2: blank.]

SUPPLIED TITLE OF TAPE(S): Anita Andersen : the Trocadero strike RECORDED: New Westminster (B.C.), 1979-[09-03 & 12] SUMMARY: TRACK 1: Mrs. Andersen was born in Princeton, where she and her family experienced the collapse of the Princeton mines (the Granby Mines) and the disastrous economic consequences. She was subsequently orphaned and moved to Vancouver where, as a very young girl, she worked for several families as a domestic; this was one of the few alternatives for working class women who needed a place to live, food and work, and who were basically unskilled. Her sister also worked as a domestic, and they both began to radicalize, due to the influences of the longshoremen's strikes -- and for Mrs. Andersen, her interests in Yugoslavian cultural activities. She came a busgirl and organised for the HREU at the Trocadero Cafe. The Cafe was struck, and a contract was eventually achieved, but the central organisers were fired and blacklisted, including Mrs. Andersen. She continued to work for the union until she moved to the Yukon in the 1940s. TRACK 2: Returning to BC, she worked for the Jubilee Summer Camp; as a cultural organiser the Yugoslavian community; and with consumer organisations.

Bench book (indexed) for Supreme Court and County Court chambers actions. The notes on court proceedings stop in 1975 however, His Honour Judge A.D.C. Washington added notes in 1977, 1978 and 1984 about his years of service

Board of Managers minute books 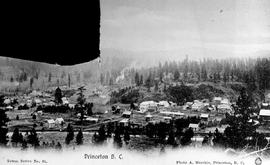 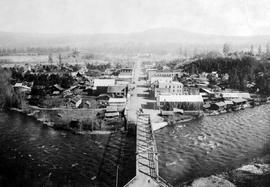 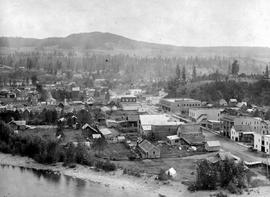 Part of Order of the Eastern Star Princeton Chapter No. 39 fonds

Order of the Eastern Star. Princeton Chapter No. 39

CALL NUMBER: T2354:0001 SUPPLIED TITLE OF TAPE(S): Industrial first aid in BC RECORDED: [location unknown], 1976-03-02 SUMMARY: TRACK 1: Early personal history; 1914 to 1929 lived in Nanaimo; went to Princeton to work in the coal mines; description of working there; 1935, went to Bridge River Valley above Lillooet; in 1937, came down to Duncan for a while, and left for Princeton again; back to Kamloops to work at Windpass Mine, a gold mine; some details of the life in each of these places; work camps and the Depression; uses of mules in the mines; went to work in Industrial Timber Mills for seven months on Vancouver Island; requirements for industrial first aid attendant at the time Mr. Mottishaw was in it at Windpass Mine; some accidents at Windpass; went to Zeballos in 1939 and worked as a first aid attendant; description of life and what he did there. TRACK 2: More description of Zeballos; the miners that were there; how the community lived; medical services available during the time he lived on Vancouver Island; "Thomas Crosby" one of the boats; Shantymen's Christian Association Hospital at Esperanza; Dr. R. D. McLean; Dr. Sharpe, Dr. Lewison; problems of delivering heath care; Reverend McLean's son drowned; communication and transportation; marriage in 1940; leaves Zeballos a few years later, around 1945; works as a first aid attendant at Kelly Douglas Distributors for one year; goes to work in foundry. CALL NUMBER: T2354:0002 SUPPLIED TITLE OF TAPE(S): Industrial first aid in BC RECORDED: [location unknown], 1976-03-02 SUMMARY: TRACK !: Foundry business in New Westminster working for four years; active in the Industrial First Aid Attendants' Association; December 1947 went with forest first aid; history of industrial first aid; starts 1932; late 1800s first, first aid committee formed to update workers' first aid program; composed 50% each of Workers Compensation Board and St. John's first aid; problem of getting a textbook and trying to arrange a program for mass interest; instructor exams come into being; Dr. Salsbury writes first industrial first aid book; a collective text begins on the revision; joins the WCB in 1943; becomes an official examiner; new book being written under auspices of BCB; first first aid; St. John Ambulance, 1964 to 1969; basis of change reviewed; how first aid training progresses and how they are graded; 1959 first instructors course. TRACK 2: Numbers of people changed; Sloan Commission discussed; oxygen therapy becomes adopted into industrial first aid; Tysoe report discussed; this gave WCB the authority to pass rules and laws concerning industry; problems faced by the WCB in trying for form rules and get authority; new areas being used to get industrial first aid across to the public. CALL NUMBER: T2354:0003 SUPPLIED TITLE OF TAPE(S): Industrial first aid in BC RECORDED: [location unknown], 1976-03-02 SUMMARY: TRACK 1: Discussion of the reasons for updating information for the masses and the hopes of using modern media for teaching. [TRACK 2: blank.]

CALL NUMBER: T1096:0001 RECORDED: [location unknown], 1965-05-28 SUMMARY: TRACK 1: Mr. Garnet E. Willis talks about his father and the people of the Chilliwack and the Similkameen region, 1894 to 1916. He describes how his family farmed near Sardis; what Chilliwack was like in his youth; steamboats on the Fraser; Harrison House; hard work on farms; school days; stories about Bill Miner; stories about John Ryder and his family; the Nelson brothers; how his father hauled freight; his father's background with the fur brigade; a discussion of the brigade route; details of his father's travels in Fort Garry, California and BC; his father's claims in the Cariboo; how his father logged on the present site of Vancouver; and John Beatty. TRACK 2: Mr. Willis continues with a story about an old man; the circumstances by which he came to the Similkameen area with his father in 1914; an anecdote about his father and the farm at Sumas; a comparison of Chilliwack and Similkameen areas; cattle and cattle drives over the Dewdney Trail; several stories about travels on the Hope Trail; a discussion of Herman Grell, known as "Shorty" Dunn; Jack Budd; and train robber Bill Miner.

CALL NUMBER: T1096:0002 RECORDED: [location unknown], 1965-05-28 SUMMARY: TRACK 1: Mr. Willis continues with more on Shorty Dunn of Bill Miner's gang; a story about Pat Kennedy of Princeton; Jim Slater; a story about Charlie Rheinhardt; Price Chandler; the beginning of Keremeos; Keremeos centre; the town of Loomis, Washington; a description of Princeton in 1913; Bill Allison; Mr. Willis' own place near Princeton; several stories about August Carlson; a story about Steve Mangat; the Olalla Mine; other mines and drilling. TRACK 2: Mr. Willis offers a story about Duncan Woods of the Hedley Mascot Mine; a discussion of his wife's uncle, a packer named John Worth; Bill Bristol and his stopping house east of Hope; a discussion of "Colonel" Robert Stevenson and his tall stories; a story about tracking lost cattle; more about Stevenson; more about Jack Budd and Bill Miner; and a story about a foot race in Montana.

RECORDED: [location unknown], 1964-02-07 SUMMARY: TRACK 1: Mr. Thomas describes coming to Canada from Gloucester, England, when he was 16, in 1891. He headed for Edmonton, then Spences Bridge when his money ran out, and got a lift to the Nicola in a buggy. He describes the railway trip to Edmonton but was detoured to Nicola Lake. He describes old timers at the Douglas Lake Ranch, a man named Graves, his experiences at Douglas Lake and its life style, and several anecdotes. He describes the town of Nicola Lake and his life there. Next he describes Princeton, prospectors coming from Rossland to the area including Jack Budd, Bill Miner, and a miner at Granite Creek named Robert Stevenson. More on Princeton. [TRACK 2: blank.]

Meteorological registers at Princeton, March 1, 1902 - June 22, 1942. A list of Meteorological Service of Canada international symbols for the designation of weather phenomena is filed at front of collection.