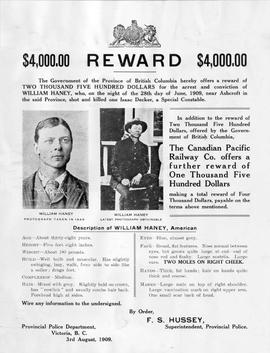 In 1946, the force policed all rural areas and unincorporated settlements as well as forty municipalities throughout the province. The British Columbia Provincial Police Force ceased to exist in 1950, when provincial policing was taken over by the Royal Canadian Mounted Police.

This series contains a scrapbook containing newspaper clippings, reward posters, and other material. The scrapbook covers the period 1901-1910.