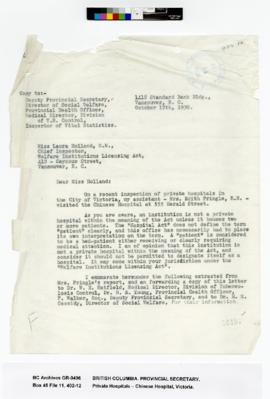 The mandate of the Provincial Secretary included all the powers, duties and functions held by provincial secretaries and registrars in other provinces of the Dominion of Canada. They included being the keeper of the Great Seal of the Province, with the authority to issue letters patent and commissions, and being the keeper of all registers and archives of the province and previous governments of the province. As with other departments, it was also the duty of the Provincial Secretary to make an annual report to the Lieutenant-Governor. The first annual report was produced in 1872.

This series consists of executive records of the Provincial Secretary, covering a wide variety of topics. The Provincial Secretary's department was responsible for a broad range of legislation and activities - including the civil service, provincial elections and (until 1946) health and welfare services. These records comprise part of the former Provincial Secretary's Central Registry. This registry consisted of general correspondence, policy directives, branch reports, inter-departmental memoranda, circulars, grant applications, and a host of miscellaneous documents.

The finding aid consists of two parts. Part I is a box/file list showing the original order and arrangement of the records. The records fall into six categories or subseries:

Part II of this finding aid consists of a subject index compiled by the Provincial Archives of BC. The index indicates the main topics or subject areas - e.g. Provincial Infirmary, Elections, Industrial Schools, etc. which are documented in GR-0496. The index does not claim to be comprehensive or exhaustive, but it should help researchers to locate documents which concern particular institutions or activities.

Some information has been severed from the finding aid in accordance with the Freedom of Information and Protection of Privacy Act. Subject

Researchers should note that several files were empty when these records were transferred to the Provincial Archives in 1975; moreover, in a few instances the PABC did not retain files which contained very routine material (such as duplicate vouchers). However, researchers wishing to reconstruct a complete file list will be able to do so by consulting the contemporary card index [Box 70]. The disposition numbers which appear on the index cards correspond to the "old file numbers" given on pp. 1-20 of the finding aid.