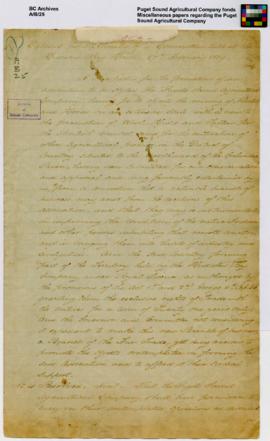 The Puget Sound Agricultural Company (PSAC) was a subsidiary of the Hudson's Bay Company, formed in 1839. Its objective was to promote agriculture and livestock farming near Puget Sound. The company was established at Fort Nisqually and was managed by a Board of Directors of HBC officers. PSAC had farms at Nisqually and Cowlitz. After the Oregon Treaty of 1846, PSAC set up farms on Vancouver Island, including one at Craigflower. Cowlitz farm was given up in 1855 and Nisqually in 1869. The company continued to operate on Vancouver Island but ceased operations in 1934.

The custodial history of the records that make up the Puget Sound Agricultural Company fonds is uncertain. Files with an "M" series number appear in the 1936 "M" series register (ADI0018), which is one of the earliest known inventories of private records in the custody of the Provincial Archives. Some individual items may have information about their custodial history, especially those that were copied from records in other institutions.

The fonds consists of various papers related to the activities of the Puget Sound Agricultural Company including a prospectus, correspondence and agreements.