The file consists of a typed transcript of an account of collecting trips made to the West Coast of Vancouver Island and the Queen Charlotte Islands in the summers of 1945 and 1946 by California biologist Edward F. Ricketts. The account is a mixture of notes on marine life and descriptions of places visited, people met methods of travel, etc. Ricketts was a friend of John Steinbeck and this account was apparently intended for Steinbeck's use. (For a biography of Ricketts see Steinbeck's "Notes from the Sea of Cortez"). The transcript, which is entitled "Transcript of summer 1945 and 1946 notes based on trips to the outer shores, W. Coast Vanc. Is., Queen Charlottes etc. New Series Note Books 3 and 4" was presented to the Royal British Columbia Museum by Joel W. Hedgpeth of Santa Rosa, California. A copy of Hedgpeth's covering letter is included with the transcript. 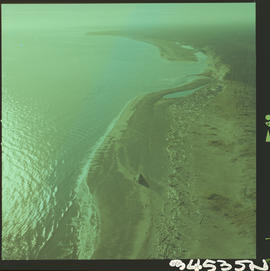 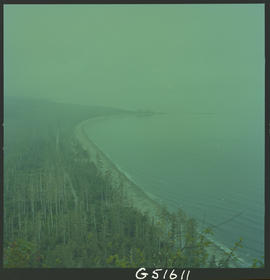 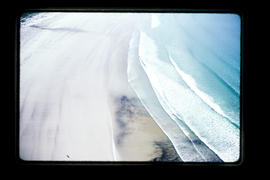 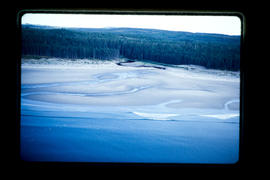 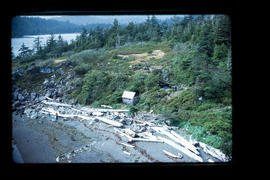 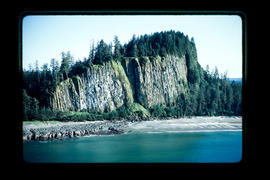 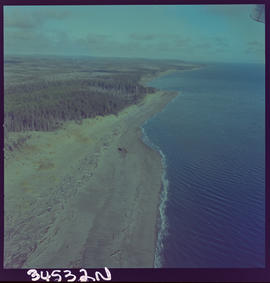 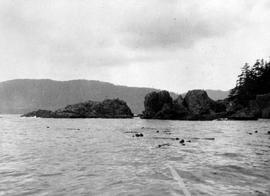 The item is a b&w photograph of rocks near Tar Islands, Haida Gwaii. 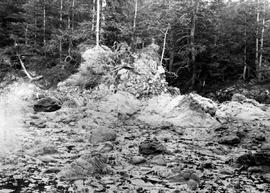 The item is a b&w photograph of agglomerate rock with tar, on the East side of Ramsay Island, Haida Gwaii. 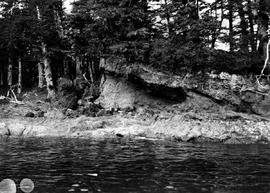 The item is a b&w photograph of agglomerate rock showing tar on the East side of Ramsay Island, Haida Gwaii. 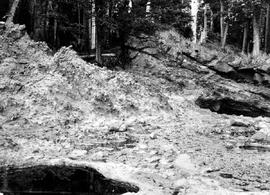 The item is a b&w photograph of agglomerate rock with tar on the East side of Ramsay Island, Haida Gwaii.

CALL NUMBER: T1150:0001 SUPPLIED TITLE OF TAPE(S): Early days of Queen Charlottes (mostly Skidegate) 1849-1910 by Grace Stephens and Agnes Russ RECORDED: Skidegate (B.C.), 1962-09-10 SUMMARY: TRACK 1: In these interviews, Grace Stephens translates and speaks for her mother, Agnes Russ. Grace Stephens describes the early life of her mother. Agnes Russ's father was an American (Hubbs) who ma;rried the Chief's daughter, she was raised by her grandparents in Masset (1859), attended Thomas Crosby's Girls' Home, married and returned to Skidegate interpreting for the first Methodist Missionary;. Grace Stephens grew up in Skidegate, married and farmed in Sandspit. She talks about early settlers, the missionaries, schooling, Skidegate and Masset villages, the destruction of totem poles, Bill ;Reid, the visit of Emily Carr, her childhood, the village at Kloo and Gold Harbour, her father (Amos Russ), details about the construction of canoes, the canoe ceremonies and travel to Port Essington.; TRACK 2: Grace Stephens speaks about the Anglican missionaries on the northern and the Methodists on the southern part of the Queen Charlotte Islands, the Tennant family and the dogfish oil refinery; (1880's), Haida hereditary chiefs, land ownership and an elected council. [a long pause in the tape] Grace Stephens translates for her mother, Agnes Russ, who is speaking in Haida. Mrs. Russ speaks a;bout the Haida people's respect for one another and their code of behavior, early memories of Masset, life in her grandfather's house, slaves, a recollection of a total eclipse of the sun, her family';s land ownership, and the Haida stories of the flood.

CALL NUMBER: T1150:0002 track 1 SUPPLIED TITLE OF TAPE(S): Early days of Queen Charlottes (mostly Skidegate) 1849-1910 by Grace Stephens and Agnes Russ RECORDED: Skidegate (B.C.), 1962-09-10 SUMMARY: TRACK 1: Grace Stephens continues to translate for Agnes Russ. Some of Agnes's family have gone to Alaska and the southern end of the island. She speaks about her marriage, her husband's slaves, and ;the Haida potlatch, and she sings one of her grandfather's songs. [See also AAAB1277.] Agnes Russ speaks about trade, her longevity, Rev. Duncan and Rev. Crosby, the Methodist mission in Masset, Mark MacGregor, Mr. Freeman, Captain Oliver, Bishop Ridley, Rev. William Duncan, and Port Simpson. She recalls the visit of Judge O'Reilly coming to survey the reserves, the amalgamation of other villages ;at the Skidegate reserve, the effects of World War One, and wildlife on the island. [TRACK 2 is a separate interview done by Bob Fortune; see AAAB1276.] 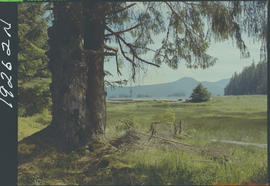 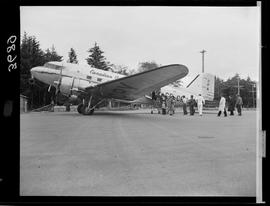 RECORDED: [location unknown], 1976-08-20 SUMMARY: Al Parkin discusses the history of trade unions in the B.C. forest industry, and particularly the role of the so-called "loggers' navy" in union organization on the B.C. coast in the 1930s and 1940s.;

Correspondence; research notes for articles and books; diaries and narratives; financial papers; clippings of articles and reviews; and samples of paper produced by B.C. Paper Manufacturing Company, Alberni, 1894. Narrative of a journey from Ucluelet to Village Island, 1896, also on microfilm. Photographs transferred to Visual Records accession 198702-6.

SUPPLIED TITLE OF TAPE(S): Alice McCrea recalls her family's involvement in the development of the Queen Charlotte Islands PERIOD COVERED: 1907-1928 RECORDED: [location unknown], 1969 SUMMARY: TRACK 1: Alice McCrea speaks about her family coming to the Queen Charlotte Islands from Winnipeg in 1912, other settler families and the island's Sitka Spruce and it's use for early airplane construction (1916). She discusses island mills, the history of Port Clements, the introduction of deer, wildlife and fish, her father's launch the "Westover", "Mexican Tom" and other characters, the school a;t Port Clements, history of the Woden (Watun) River area, communities and residents along the Masset Inlet, logging and water transportation.