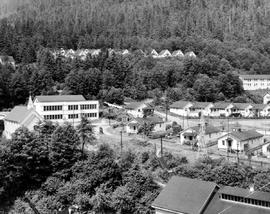 2.2 m of textual records and other material

Rayonier Canada (B.C.) Limited was active in the forest industry in British Columbia in the 1960s and 1970s, particularly in ownership and operation of pulp mills at Woodfibre and Port Alice.

In December 1967, in the U.S., the boards of Rayonier Inc. and the International Telephone and Telegraph Corporation (ITT) approved a merger, and in March 1968, stockholders of Rayonier voted approval for the merger of their company into ITT. The new company, ITT Rayonier Incorporated, was a wholly-owned subsidiary of ITT. Its Canadian subsidiary, ITT Industries of Canada Ltd., now owned Rayonier assets in Canada.

The records were donated by Western Pulp Ltd. Partnership in 1985.

The fonds consists of annual reports, ledgers, reports of the safety committee, Resident Engineers daily diaries, daily mill reports, miscellaneous reports, photographs and maps and plans (of the pulp mill and other buildings at Woodfibre and of the townsite).