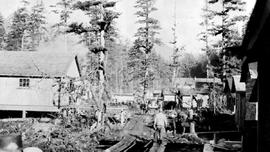 Records of the Chief Mining Engineer

The series consists of five files created or acquired by the Chief Mining Engineer between 1938 and 1955. The files include: an illustrated 1938 report on Zeballos written by T.W.S. Parsons, Assistant Commissioner of the B.C. Police; a distribution list for a 1942 report on iron and steel; an illustrated copy of a 1948 report of Canadian National Railways on use of coal from Hasler Creek, B.C. in railroad locomotives; correspondence relating to the 4th Empire Mining and Metallurgical Congress and other staff matters from 1947 to 1950 and correspondence re Alaska Pine and Cellulose operations in Peace River district, 1955.