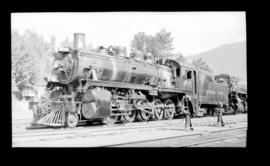 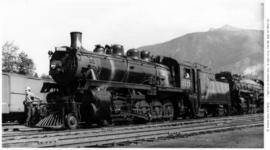 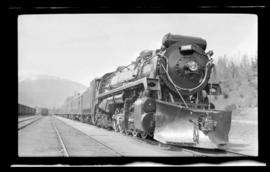 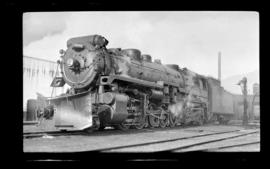 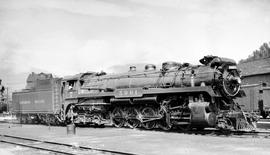 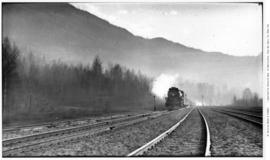 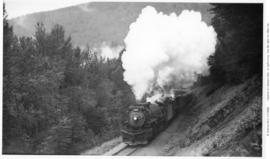 Standing in cockpit - Mrs. E.G. Sansford whose husband was local manager Bank of Commerce Revelstoke. [text from back of photo]

A history of Revelstoke and the Big Bend / William Bilsland

Also included in this file is an unpublished, typescript draft (2 copies) of an earlier (1952) history of Revelstoke prepared by the author for publication by the Department of Education in the British Columbia Heritage Series. 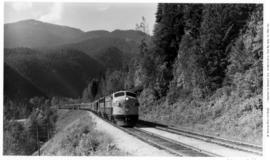 Action on the Columbia

The item is a composite print of an industrial film made around 1964. It shows the construction of the Mica, Duncan and Arrow Dams in the Columbia River basin. Some of the communities in the project area are shown and the problems and benefits are discussed. There is footage of Revelstoke and Trail-Kaslo area, flooding of the Columbia near Trail and aerial views of area communities. There is also footage of the 1964 ratification of the Columbia River Treaty at the International Peace Arch, with US President Johnson, Canadian Prime Minister Pearson and BC Premier Bennett.

RECORDED: Cranbrook (B.C.), 1980-10-31 SUMMARY: Interesting description of normal school in 1917-1918. Amusing and vivid descriptions of her schools, living conditions, and the characters in the district including the bucolic suitor. She taught at both the Tonkawatla school near Revelstoke and at the Sydmouth School near Arrowhead, 1919-1920.

The item consists of a reel of 16 mm film which includes the following items:
D. At Cawston, an entire unprofitable apricot orchard is cut down. The cut trees are shredded and dispersed as mulch. At Revelstoke, three deep wells are being drilled to provide water for irrigation and domestic use.
E. Orchard scenes.
F. The golden nematode, a pest of tomatoes, potatoes and eggplants, infested Vancouver Island in 1965. The plant protection of the federal Department of Agriculture eradicated the threat using quarantine, soil preparation and fumigation.
G. The federal Department of Agriculture's national potato-breeding program. At a research station in Fredericton, researchers select the best varieties for each region of Canada.

RECORDED: [location unknown], 1965-10-30 SUMMARY: Andy Gray recalls in detail his career on the CPR. Born in Scotland, he came to Canada in 1890 and then to Vancouver 1892. He began work on the CPR in 1906 as a "wiper", then a fireman, and by 1911 as an engineer. He discusses his experience working with the trains in Revelstoke from 1909 to 1915; the Rogers Pass Slide of 1910 with the only survivor, Bill LaChance; train recollections throughout the province; Kootenay Central; and "Cranbrook Ed," who was one of the escaped elephants from a visiting circus at Cranbrook.

The item is a b&w photograph of the Arrowhead School at Revelstoke. 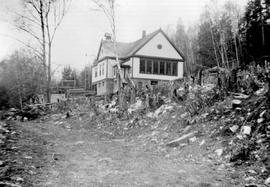 The item is a b&w photograph of the Arrowhead School at Revelstoke.

[Atlas of miscellaneous plans in the Railway Belt, west of the fifth meridian]

Item consists of one bound album measuring 41 x 55 cm. It contains 95 miscellaneous plans of the BC Railway Belt, west of the 5th meridian. Maps were created by the Dominion Lands Office between ca. 1903-1922. Individual maps range in dimensions and substrate material. Several have been annotated with colour and pencil. Received dates are stamped on most maps, noting the Dominion Lands Office branches of either Revelstoke or Kamloops. Maps show a variety of features such as rivers, lakes, mountain ranges, forest types, park reserves, Canadian Pacific Railway lines, legal subdivision numbers, and names of homesteaders.

Maps are arranged by range (Ranges 15-29) and township or range, township, and quadrant, based on surveys conducted by numerous surveyors between 1885-1919. Maps from 1920 and earlier were approved and confirmed by the Department of the Interior, Ottawa, Surveyor General, Édouard-Gaston Deville. Maps from 1921 were approved and confirmed for the Surveyor General by Thomas Shanks.

Autobiographical accounts and other material

The series consists of "Down Memory Lane" and "The Experiences of a Little Girl" autobiographical accounts by E.M. Leonard (Mrs. E.M. Fulmer) describing her early childhood in Salmon Arm, nurses' training at the Queen Victoria Hospital in Revelstoke and work at Shaughnessy Hospital in Vancouver. It also includes "The Story of John F. Leonard" by M. Fulmer, an account of her brother's life, a composer of operettas for Vancouver schools. Letters patent and items advertising E.M. Leonard's Peristaltic Therapeutic Apparatus.